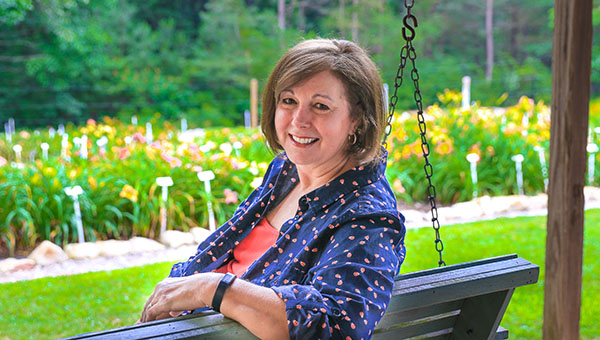 Dancing Daylily Garden Owner Becky Parr has repaired her garden after a plane crash a year earlier caused extensive damage to the garden. (Special to the Reporter/Dawn Harrison)

HELENA–Almost a year after a plane crashed into Becky Parr’s backyard located off South Shades Crest Road in Helena, Parr and her beautiful daylily garden have nearly made a full recovery just in time for the peak bloom season.

On Saturday, June 6, Parr opened up her Dancing Daylily Garden to the public for an open house from 8 a.m. to 2 p.m. for customers who had the opportunity to come in and view the garden and purchase daylilies.

Nearly a year later, remnants of the plane crash can still be found on the property located at 4353 South Shades Crest Road.

“I’ll still find parts from the crash out here occasionally,” said Parr. “I’ve found screws, pieces of metal, a light cover and things like that.”

The crash happened last July when a Piper PA-32-300, N9103K was traveling from Panama City, Fla., and intended to land in Tennessee, but the plane’s engine lost power and crashed,  hitting trees and landing in the flower bed in Helena.

Parr could recall the events of the accident as if it had just happened a day earlier.

“I remember hearing the sirens and it brought back memories of when our house burned down,” said Parr. “You could hear them coming and I was thinking hurry, hurry, hurry because things were burning. We had three Helena fire trucks and two Hoover trucks and it was amazing to watch all the paramedics and EMT people. They had a team working on each person.”

Four people were in the plane at the time of the crash, and each suffered severe injuries, but no lives were lost as the plane became engulfed in flames.

“The fire investigator was going through and saw it and said they should not have survived coming from a fall like that,” said Parr.

Taking a stroll through the garden almost a year later, it’s as if the crash never happened and Parrs’ garden, which contains over 1,000 varieties of daylilies, are in full bloom and bursting with color.

Some of the damage from the crash included melted signs, gallons of fuel on flowerbeds, destroyed trees and damage to the sprinkler system.

Parr and her husband Morris do all of the work in the garden and the whole month of June is dedicated to selling the daylilies to customers.

The garden has several different sections with daylilies that are named after spiritual names, sports, coaches and more.

“I will give a catalog to people with all the different names and varieties so people can find what they want,” said Parr.

Daylily names to choose from can range from an Auburn or Alabama reference to “nekkid woman doing a jiggy dance,” and can come in all shapes and colors.

The Dancing Daylily Garden will be open every Saturday through June from 8 a.m. to 2 p.m. or by appointment.