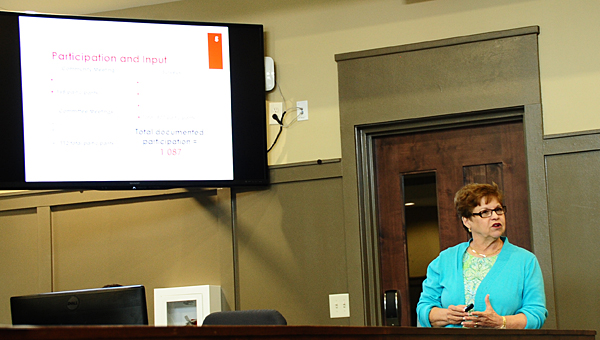 ALABASTER – The Alabaster City School System will focus on strengthening its facilities, communication, classroom offerings and leadership over the next several years after the city’s Board of Education approved the system’s five-year strategic plan during a June 8 meeting.

The School Board voted unanimously during the meeting to approve the five-year plan, which was prepared by Marcia Burke, owner of Marcia Burke Enterprises.

ACS hired Burke in January to conduct the strategic planning process, which was carried out over the course of the past several months. Through the process, Burke gathered input from a committee of school stakeholders, from local residents during multiple public input sessions and through a public survey on the school’s website.

“If I could summarize the survey responses into just one phrase, it would be that people like what they have and they want more,” Burke said, noting the process had “great” public participation. “These were among the most positive survey responses we’ve seen while working on these strategic plans throughout the state.”

In approving the strategic plan, the School Board also approved a new mission statement reading as follows:

“The mission of the Alabaster City Schools is to partner with families and the community to inspire and prepare graduates to be responsible and productive champions of their future.”

The plan also identified four main goals for the school system over the next five years:

-Continuous improvement in government and leadership

-Continuous improvement in teaching and learning

Burke encouraged the School Board to focus on continuing education for school system leaders, teachers and board members, and to focus on attaining 100 percent high school graduation rates.

“If the students are successful, your schools will be successful,” Burke said. “Your community has great enthusiasm and confidence in your start.”

The summer reading program at the Parnell Memorial Library in Montevallo has plenty of fun activities for the whole month... read more