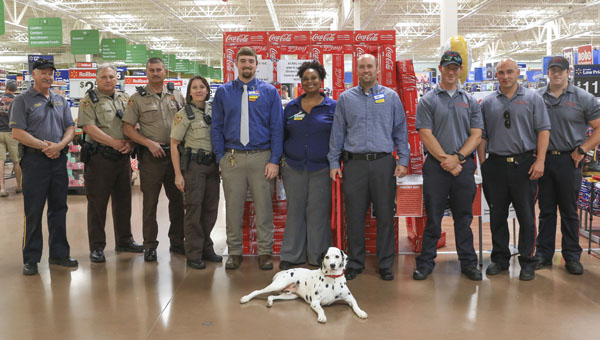 Chelsea Fire & Rescue’s firehouse dog, Hero, was “arrested” June 6 at Walmart in Chelsea during a fundraiser for Children’s Hospital in Birmingham. All donations made to bail Hero out of jail will go to the hospital. (For the Reporter/Dawn Harrison)

CHELSEA – Chelsea Fire and Rescue’s firehouse dog, Hero, spent hours in jail after his arrest at Walmart on June 6 as he waited for passersby to help bail him out.

Hero’s incarceration was part of a fundraiser for Children’s Hospital in Birmingham that Walmart in Chelsea organized in conjunction with the city’s fire department and the Shelby County Sheriff’s Office.

From a jail cell constructed of Coca-Cola boxes stacked on top of each other, Hero watched customers stop by a table in front of his cell and donate money to his bail fund, all of which will be given to the hospital.

The event raised $558 for Children’s.

“The fire department has such a good working relationship with Children’s Hospital,” Chelsea Fire and Rescue Lt. Don Williamson said. “If we get any opportunity to work with Children’s, we do it.”

Williamson said the idea of putting a fire department member in “jail” to raise money for Children’s came from Judy Green, personnel coordinator at Walmart in Chelsea.

Williamson nominated Hero for the task.

“All these kids love that dog, and the community is so familiar with him,” Williamson said of the department’s only K-9 member.

“It just sounded a lot more exciting,” Green added of employing Hero for the event.

Green said the June 6 event is part of Walmart’s ongoing fundraising efforts for Children’s Hospital, and every dollar collected in Alabama stays in Alabama.

“It’s amazing what they do for children and their families,” Green said of the hospital. “It’s just a win for everybody.”

Walmart in Chelsea is still accepting donations to Children’s Hospital in Birmingham.