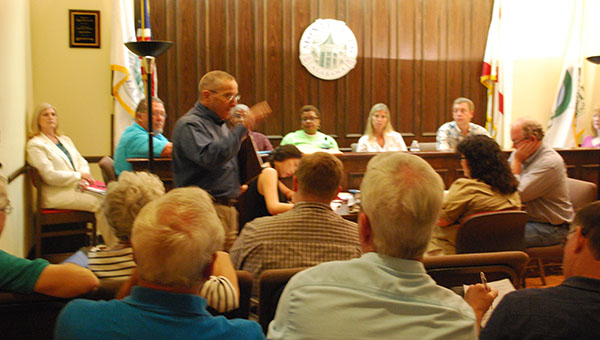 Dozens of citizen’s addressed the Montevallo City Council on Monday, June 8, with concerns over the future of the Montevallo Golf Club. (Reporter Photo/Graham Brooks)

MONTEVALLO–Dozens of concerned Montevallo residents, non-residents, golf course supporters and more showed up in droves for the Monday, June 8, Montevallo City Council Meeting and all shared the same passion, and that’s to preserve the Montevallo Golf Club and improve it for generations to come.

Every seat was taken at Montevallo’s City Hall and much of the crowd spilled out into the hallway as dozens of people addressed the City Council during the public comments portion of the meeting that lasted well over an hour.

The concern comes from an agenda item titled “Finance Committee recommends authorizing Mayor to administer the orderly transition of the management of the golf course back to UM on or before the lease termination date of October 2016.

“The Montevallo Golf Course property is owned by the University of Montevallo,” said Cost. “I also want to mention the big elephant in the room and that is the golf course has consistently been losing money. “Over the last 16 years they have only turned a profit three years. What we’ve introduced to the Finance Committee is for us to bring in a consulting firm to look at the golf course and to determine how we can make a profit. If the university would split that expense with us, the expense is $30,000 to have the consulting firm come in.”
The thought of bringing in a consulting firm did not sit well with those in attendance.

“I think, not being disrespectful, that you’re wasting your money getting a consultant,” said PGA Golf Professional Ed Davis who has been at Montevallo 17 years. “If you’ll check your figures, in 1999 when I got here our payroll was at $196,000. You know what our payroll was last year? Sixteen year’s later it was $182,000. You can blame it on management if you want to but we’re running on skeletal crew and that’ll be another $30,000 that’s not going to help us.”

“The way I look at it, if we pull the rug out from underneath us the values of our houses are going to go down, down, down,” said Johnny Williams. “It’s as simple as that, that’s what’s going to happen. I don’t understand, as much as we enjoy the course and what it does for the community, why is it in your budget? We’re talking $30,000 a year.”

University of Montevallo President Dr. John Stewart tried to clear up some misconceptions or rumors that the city and university have a hidden agenda to do something with the property and explained there is a process the university would have to go through if the lease transition to UM.

After many opinions were given, Cost and the Council ultimately decided to table the discussion again to the next city council meeting, where it will once again be on the agenda and citizen’s will have another chance for public comment on the issue.