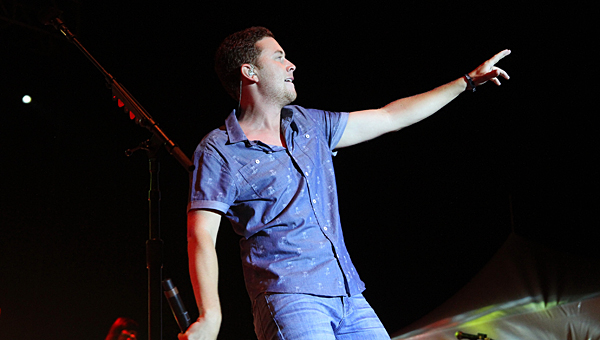 Country music star Scotty McCreery performs for a near-record crowd at Alabaster’s CityFest on June 6 at Municipal Park. (Special to the Reporter/Eric Starling)

ALABASTER – Clear weather, musical performances from several local and nationally-renowned bands and plenty of kid-centered events drew one of the largest crowds in Alabaster CityFest history on June 6, according to event organizers.

The crowds began rolling in shortly after the event began at 9 a.m., and kept coming throughout the day, said Alabaster Arts Council President Adam Moseley. The Arts Council organizes CityFest, which is the largest festival in Shelby County, each year. “We had a great crowd all day,” Moseley said on June 7. “It was one of the largest crowds we have ever had.”

Moseley attributed much of the evening crowd numbers to the event’s headliner, 2011 American Idol winner Scotty McCreery. He is well-known for songs such as “The Trouble with Girls,” “See you Tonight” and “I Love you this Big,” and wowed spectators during the show by performing many of his hit songs.

Rock band Civil Twilight took the stage at 7 p.m. to open for McCreery, and performed many of its hit songs featured on shows such as “One Tree Hill,” “The Mentalist,” “Arrow” and “Pretty Little Liars.”

“I think Scotty McCreery put on an incredible show and this year will be hard to top. But, we will start next week to do just that,” Moseley said.

Throughout the day, children also enjoyed the KidsFest area, which featured inflatable bounce houses and slides, thrill rides, a healthy eating expo and a craft area. Vendors and local organizations filled out the CityFest vendor areas and a car show featured everything from a Dodge Viper to an accurately recreated “Mystery Machine” Volkswagen van.

Moseley thanked the event’s sponsors and volunteers for helping to keep the event free for visitors each year.

“As a community, we owe so much to all of our great sponsors,” Moseley said. “Without them and the hundreds of volunteers, this would not be possible.”

Chelsea Fire & Rescue’s firehouse dog, Hero, was “arrested” June 6 at Walmart in Chelsea during a fundraiser for Children’s... read more