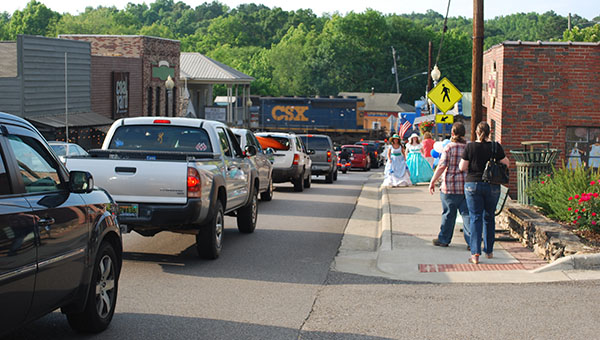 HELENA–If you’re not familiar with Helena or the Old Town area and happen to be driving through town on the first Friday of the month, chances are you’re going to be stuck in traffic and for good reason.

Helena First Friday is presented by the Helena Business Association and is meant to get the whole city of Helena involved in a fun, family atmosphere.

Local businesses stay open later, area vendors will set up booths, live music is played and there was even an Elvis spotting at the latest First Friday on June 5.

Helena resident Allison White was at the June 5 First Friday with her family and explained why she likes the event so much.

“It’s just a fun event and it’s neat looking at all the shops in Old Town,” said White. “It’s nice that the vendors stay open later because when you work during the day it’s hard to make it over here in time. It just has a neat festival feel to it.”

June 5 was a busy night as Helena also kicked off “Movies in the Park” at the Helena Amphitheater where Disney’s popular animated movie Frozen was shown on a projector.

“We took it over June of last year and I have to say it’s caught us off guard,” said Farmer. “It’s been very successful and we’ve had pretty good success with getting vendors in. “We’ve had awesome crowds and I think each month we keep growing and growing.”

Some of the main people benefitting from Friday Friday’s are Helena business owners because of the crowd the event draws and the next First Friday in July is scheduled to be the biggest First Friday of the year.

The next First Friday is scheduled for Friday, July 3.

The Pelham City Council recently approved a lease for the second floor of the city’s Water Administration Building to make... read more