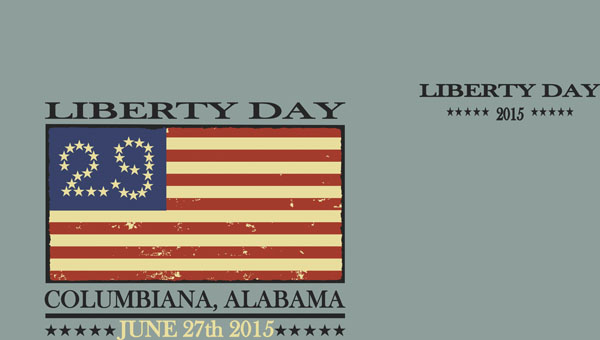 The event began in 1986 as a celebration in honor of the 100th anniversary of the Statue of Liberty when the late Buck Falkner was mayor.

The event was so successful; it became a yearly tradition the last Saturday in June.

Liberty Day grew to become a two day event to include a band to entertain on Friday night using the venue and success of the Columbiana Merchants and Professionals Association’s Music on Main.

Saturday has become an all-day time of fun for the public from 9-4:30 p.m. on Main Street and concluding with a great band and fireworks on the Shelby County High School football field from 7-9:30 p.m.

From 9 a.m.-3 p.m. food and merchant vendors line Main Street to sell their wares; live entertainment is continuous from the Liberty Day stage in front of the Old Courthouse; the Shelby County Museum, George Washington Museum and SCAC are open.

The First Baptist Church of Columbiana added its Hall of Memories which honors local veterans with exhibits opened from 9-3, too.

From 1- 3 p.m. the newly crowned Miss Alabama makes one of her first appearances, meeting and greeting for pictures and autographs on South Main Street with Miss Shelby County and Miss Shelby County Outstanding Teen, sponsored by the Vignette Club.

The Liberty Day Parade starts at 3:30 p.m. with the Grand Marshall, Misses and much more.

Prizes are given for best floats. Saturday night ends at SCHS football field with a great band beginning at 7 p.m. and fireworks starting at 9 p.m.

“Liberty Day is a time we can set aside to celebrate the liberty that we enjoy in these United States,” said Mayor Stancil Handley. “It is a good time to socialize with our neighbors, friends and family and appreciate how fortunate we are to have each other and the sense of community and togetherness we have in Columbiana. We are privileged to live in the best country in the world and in the best city ion that country.”

Dozens of citizen’s addressed the Montevallo City Council on Monday, June 8, with concerns over the future of the Montevallo... read more