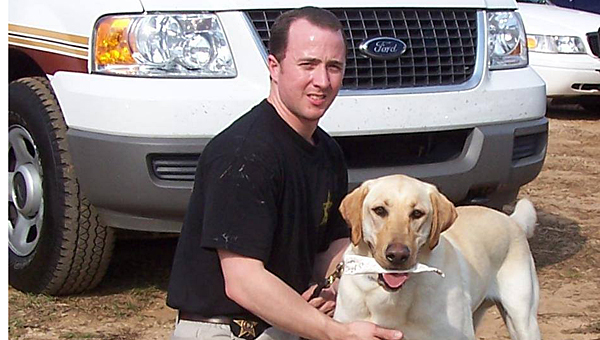 Shelby County Sheriff’s Office Lt. Russell Bedsole, who then was a deputy, conducts a training exercise with his K-9 officer, Chase. The K-9 officer recently died at the age of 13. (Contributed)

After receiving permission from the vehicle’s owner to search the car, Bedsole followed his standard procedure of checking the vehicle for food, which could distract his K-9 companion from his search.

“(Chase) got to the back glass and turned his head sideways,” Bedsole said during a June 8 interview. “I noticed he was really focusing on that area, so I checked on him. He had discovered some beef tips and rice.”

After a laugh with the vehicle’s owners, Bedsole sent them on their way. 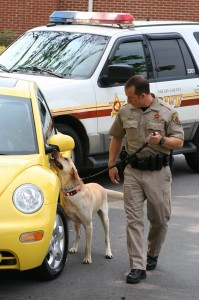 Bedsole and his family have countless such memories of Chase, who died in early June at the age of 13. Chase was born in a litter of three puppies, all of which eventually became K-9 officers.

Bedsole, who was a sheriff’s deputy at the time, served as Chase’s handler from 2003-2008. After Chase served five years, he was granted an early retirement by then-Shelby County Sheriff Chris Curry, after which time the K-9 officer became the Bedsole family dog.

While the Bedsoles and the sheriff’s office are mourning the loss of their longtime companion, they will forever hold fond memories of Chase’s enthusiasm, hard work ethic and detection skills.

“He was an extremely highly driven dog. He had a very motivated type of personality,” Bedsole, currently a member of the Alabaster City Council, said. “While some dogs had to be stimulated with toys, he wanted to get out of the vehicle and do his job. He had a good nose.”

During his law enforcement service, Chase helped Bedsole locate illegal controlled substances on many occasions – Sometimes without even having to search a vehicle.

“A lot of people would see him and do the right thing and confess where it was,” Bedsole said.

Chase also made numerous public appearances and school visits on behalf of the sheriff’s office, and was well-liked in the community.

“The department is going to miss him, and our family will miss him around the house,” Bedsole said. “He was a great dog.”