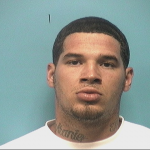 The Shelby County Drug Enforcement Task Force arrested Caleb Alexander Watts, who lists an address in the Peavine Trailer Park in Alabaster, on June 8 and charged him with three felony counts of unlawful distribution of a controlled substance.

According to Circuit Court records, Watts pleaded guilty to three counts of unlawful distribution of a controlled substance in August 2013, and has a previous conviction on a first-degree attempted assault charge.

In a bond recommendation filed with Watts’ arrest warrants, the District Attorney’s Office wrote Watts’ current charges “Stem from an ongoing drug trafficking enterprise that has been under investigation since January 2015.”

“(The) defendant is a danger to himself and to the public at large, and poses a risk of flight,” read the bond recommendation.

Watts is scheduled to appear in Shelby County Circuit Court at 8:30 a.m. on July 9 for a preliminary hearing.

The Chelsea City Council reviewed a proposed ordinance on a rezoning request for land to be used for a proposed... read more