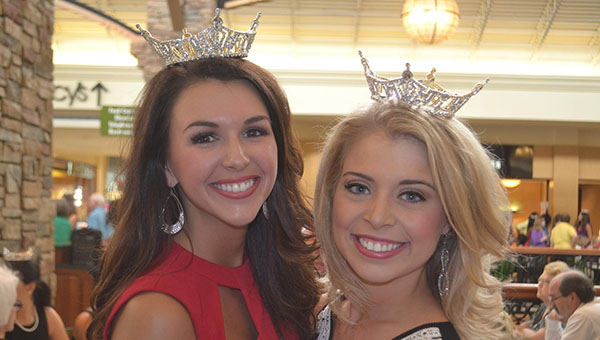 BIRMINGHAM–This past year has been a busy one for the former Troy University graduate and Helena native Amanda Ford.

Ford, along with 49 other contestants from all over the state of Alabama competed at the 2015 Miss Alabama competition held at Samford University.

Ford, a Pelham High School graduate in 2010, was crowned Miss Shelby County earlier in the year and has represented Shelby County well by promoting her platform for cancer research and doing numerous work for the Relay for Life organization.

“I was thankful to be in the competition and I had a lot of fun the entire week,” said Ford. “I was happy for Meg and I think she will represent the state well in Miss America.”

Ford was referring to Meg McGuffin, who was representing Miss Phenix City, and was crowned this year’s winner for Miss Alabama.

The 50 contestants moved into Samford University on May 31 and stayed a week in the sorority houses where they participated in many different activities.

“My favorite was getting to visit Children’s Hospital,” said Ford. “We also visited Dreamland Barbecue.”

During the actual Miss Alabama competition, Ford and the other contestants had to face-off in four different categories including interviews, talent, swimsuit/onstage question and evening wear.

During her time competing in Miss Alabama, Ford was given the IMPACT Award, that is awarded to the person who makes the biggest difference in their community. It was voted on by 25 percent of the backstage moms and 25 percent of her fellow contestants.

Ford received a degree in broadcast journalism from Troy and recently interned with Fox 6 News.

“I’m not entirely sure what I want to do just yet but I feel like this past year and my internship at Fox 6 has given me valuable experience,” said Ford.

Campers competed in relay races as a part of the Get in the Game week. (Reporter photo / Jessa Pease)... read more