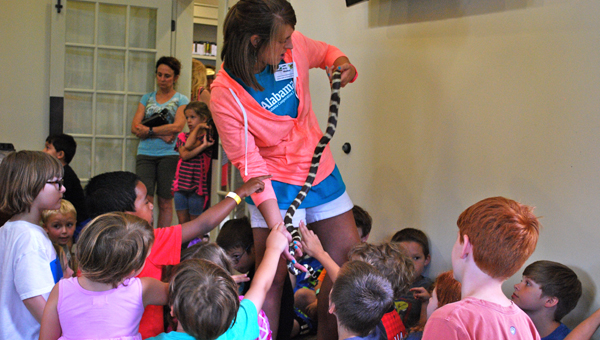 Kids reach out to touch Fluffy the king snake during an Animal Super Powers presentation led by the Alabama 4-H Center at the Mt Laurel Library. (Reporter Photo / Molly Davidson)

Kids learned about each animal, their natural habitat, diet and special characteristics, or “super powers.”

Hunt explained how Walter the turtle uses “countershading” to hide from predators. His yellow belly disguises him as the sun to predators in the water below, while his dark shell hides him from predators above.

Kids also learned that king snakes, such as Fluffy, eat other venomous snakes and pests, such as mice or rats.

“Snakes are wonderful creatures,” Hunt said. “They may look a little scary, a little intimidating, but in my opinion, that’s because people don’t know about them.”

While some of the animals Hunt and Walker brought can be found in Alabama, some of them cannot, such as Phoenix. The Harris’s hawk is native to the American southwest and most commonly found in areas such as California, New Mexico and Arizona.

“These guys are nicknamed the wolves of the sky, because they hunt in packs,” Walker explained. “They can take down animals as big as coyotes.”

The visit from the Alabama 4-H Center is just one of the many fun and educational programs the Mt Laurel Library is hosting throughout the summer as part of the summer reading program. For more information, visit the library’s website, Mtlaurellibrary.org.

Montevallo’s Brown works out for Bucks