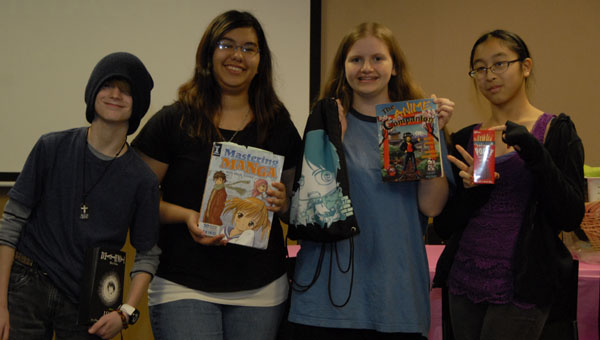 From there, Anime Club and Manga Book Club were formed.

The term anime refers to Japanese animated productions featuring hand-drawn or computer animation, usually characterized by colorful graphics, vibrant characters and fantastic themes. The animations are often based on Manga, or comics created in Japan.

Last year, the Pelham Public Library created a weekly anime club, and Kitchens said they had a good following of kids. Because it went over well, Kitchens decided to try a different spin with more of a book focus.

Manga Book Club meets every Wednesday from 1-4 p.m. at the library and is open to all middle and high school students.

“It’s the kind of thing where you might love (Manga), but you might not know who else loves it,” Kitchens said. “I’m hoping to pull those kids who didn’t know that everyone else loved it too to create a group.”

Some of the club’s active members are Dakota Brown, Steph, Rachel Danielson and Putt Putt. Many started by watching more popular anime such as Pokémon, Dragon Ball Z and Naruto, and then continued delving into the different series.

“(My favorite part) is getting to meet people that understand and get the concepts you are talking about,” Steph said. “I have friends, but they don’t watch anime. When you try to talk about (anime), they are insecure or they don’t feel comfortable. When you finally meet people who understand, you feel like you belong to a place.”

The club gives manga and anime fans a chance to talk about their favorites, play games and watch anime together.

Most of the members also express their passion for anime in other ways. Steph draws her own anime, Danielson creates pixel art and Putt Putt and Brown cosplay, or dress up as their favorite characters.

“I like the social interaction how you can meet people who have the same interests,” Putt Putt said. “You also won’t be judged by other people on what your interests are.”

Campers play volleyball in the gym of the Pelham YMCA. The Pelham branch of the YMCA has activities and camps... read more