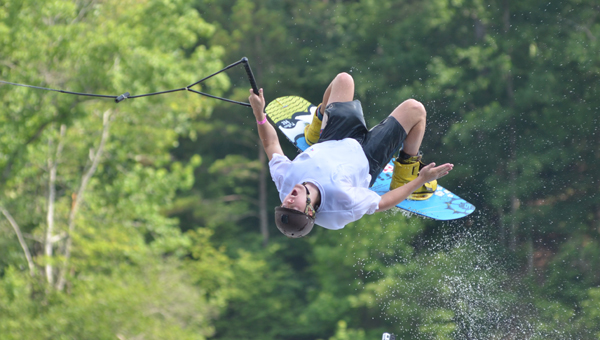 PELHAM – Flipside Watersports is in its second year out at Oak Mountain State Park. Jeremy Talbot and his wife, Kristen, run the operation and are looking forward to a big second summer.

Jeremy Talbot is from Louisiana, and spent his formative years behind a boat on a slalom ski. He moved to Birmingham when he was 19, and didn’t know anyone who had a boat or where to find a lake, and in turn wasn’t able to ski as much. He discovered cable parks by accident, he relayed, and noticed wakeboarding was growing as a sport and thought getting a cable park close to Birmingham was a good idea, but never had any concrete thoughts about implementing the idea anywhere close.

When he married his wife at Oak Mountain State Park, they joked about opening up a cable course on the lake in the park. Jeremy Talbot joked his wife either wanted a baby or a business, so the cable park quickly became his primary focus. Soon, a deal was made with the park for the cable course to be erected.

“Once the deal was made with Oak Mountain things moved very slowly at first,” Jeremy Talbot said. “Then, one day, it started moving very fast and we had to scramble to get everything done. We ran the month of May last year free of charge to work out the kinks and raise awareness. In June we had a soft opening, we opened at 10 a.m. and there was a line out the door. Two weeks later I had to stop advertising.”

The first year was a rousing success for the park, and the second year looks to be following suit early on.

The season runs from March to October, and is seven days a week from May to August. The course is open from 10 a.m. to sundown, and the last pass is sold at 7 p.m. The first hour costs $15 with each additional hour running $10 while an all-day pass costs $45. Gear is also available to rent, with boards costing $10 to rent and helmets and vests costing $5 a piece to rent.

Talbot believes the reason the cable course is so popular is because of the novelty and the community.

“It’s something fresh, something new,” Talbot said. “A lot of people don’t have access to lakes or boats. They don’t know who owns a boat; they don’t know what lake to go to. It also builds community very quickly. It’s very laid back.”

Players battle for possession during a game in the 2014 Dynamic Develpoment Soccer Camp. The second annual camp is set... read more