HELENA–A 33-year-old Helena man is in custody after officers were dispatched to an alleged robbery that took place at a Kangaroo Gas Station located off Shelby County 95 on the morning of June 9, according to a Helena Police Department press release. 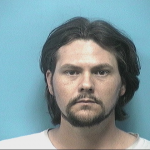 Officers arrived on scene and confirmed with the store clerk that a robbery had taken place. A couple of hours later, Steve Allen Hahn II of Helena was identified as the suspect.

At approximately 9 a.m. on June 9, detectives located Hahn in Pelham at his place of employment.

Hahn was taken into custody without incident and transported to the Helena Police Department where he was interviewed.

After the interview, it was determined that Hahn was also allegedly responsible for the robbery of the same gas station on Aug. 14, 2014.

Hahn, who lists an address in the 1300 block of Whirlaway Circle in Helena, was arrested on June 9 and charged with two Class A felony charges of first-degree robbery and one Class C felony charge of unlawful possession of a controlled substance.

According to Hahn’s arrest warrant, in both the Aug. 14 and June 9 robbery, Hahn allegedly used a box cutter knife in an attempt to steal cigarettes and U.S. currency from the gas station.

Hahn was transported to Shelby County Jail and has a bond set at $70,000.

First-degree robbery is a Class A felony and is punishable by up to life in prison for each count. Unlawful possession of a controlled substance is a Class C felony and carries a maximum sentence of 10 years in prison if convicted.