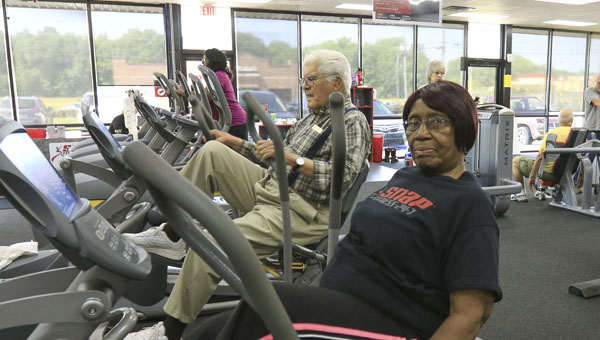 Shelby County residents Elvis Walton and Gladys Perkins are both in their 90s and work out two or three times every week at Snap Fitness in Columbiana. (Special to the Reporter/Dawn Harrison)

COLUMBIANA – Anyone who says staying fit at an old age is impossible hasn’t met Gladys Perkins and Elvis Walton.

Perkins and Walton, in their 90s, are fixtures at Snap Fitness in Columbiana, where they exercise several times every week in an effort to maintain the shine of their golden years.

“I may not can do it as good as you, but I try,” Perkins said as she rotated among different machines in the gym June 5, referencing Philippians 4:13, which says, “I can do all things through Christ who gives me strength.”

“We love working out together,” Maxine said. “But I don’t have her energy.”

Not one to sit still, Perkins stays busy with gardening, serving at her church, cleaning her house, visiting friends or family members in the hospital and cooking meals for dozens of guests at her home each Sunday.

Perkins is the secretary of Sunday school and sings in the choir at Providence Baptist Church in Shelby, where she is also the oldest active member.

Her husband was a pastor before he passed away in 1989.

“I don’t sit down,” Perkins said. “I go and do and everything. That’s what’s keeping me alive.”

Perkins’ faith is evident as soon as she starts talking and is something she isn’t shy about sharing with others, wherever she is.

Walton, 91, uses about five different machines at the gym, including the rowing machine, bicycle, chest press and triceps press.

“It makes me feel better, and I try to work out three times a week,” Walton said.

He has been a member at Snap Fitness for nearly two years through the Silver Sneakers program available through his health insurance.

“I thought it was a good idea,” Walton said. “You get the exercise you won’t do at home. My doctor tells me I need to do it.”

Walton’s cousin, Nancy Walton Brasher, looks after him at home and accompanies Walton to the gym.

“It’s good for self-esteem, too,” Brasher said. “You feel like you’re doing something that’s worthwhile.”

Walton’s exercise regimen likely helped save his life when he had a three-organ infection.

“The doctor said people don’t usually survive that, but he had built up his body and had something to fight with,” Brasher said.

Like Perkins, don’t expect to find Walton sitting on his couch when he isn’t at the gym.

“We stay active. We go somewhere every day,” Walton said, Brasher by his side. “You’ve got to stay busy. If you sit around and watch television, you won’t last long.”

Walton is accustomed to being busy, though. He spent three years in the United States Air Force, with two-and-a-half years in New Guinea during World War II.

He sang bass in a quartet called Rhythm Masters for nearly 50 years, and met his namesake, Elvis Presley, at a program in Memphis before the latter rose to superstardom as a singer.

Walton was married to Hilma Walton for 71 years until she passed away more than a year ago.

He said going to the gym becomes a habit and opens doors to other activities one can do with an active lifestyle.

“You can do just about anything you want to do,” Walton said. “It’s better than a lot of medications you take. You mix and mingle with the younger people, which is good for you.”

Along with Perkins and Walton, Robbie Kivette is also a member at Snap Fitness who is in her 90s.

For Perkins, her secret to staying healthy is, “Jesus on the inside, showing up on the outside.”

“I tell everybody he’s the one keeping me alive, keeping me going,” Perkins said.

For more information about offerings for seniors at Snap Fitness, call Jennifer Pierce or Tiffany Whitt at 610-9291.

By MOLLY DAVIDSON / Staff Writer HOOVER—Tucked away in a second floor closet of her Greystone residence, Donna Francavilla has... read more