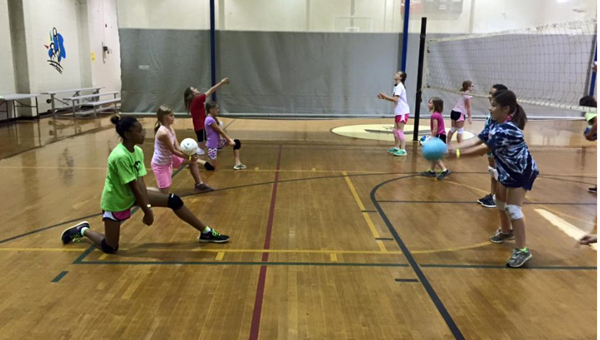 Campers play volleyball in the gym of the Pelham YMCA. The Pelham branch of the YMCA has activities and camps each week all through the summer for children ages five to eighth grade. (Contributed)

It’s June and the summer season is upon us, which means that the Pelham branch YMCA has been taken over by a large brood of children. Well, maybe not literally, but the facility has its fair share of campers and athletes signed up for the summer. Around 450 daily to be exact, according to Erin Smith, the sports director for the YMCA who coordinates all of these programs. “Right now we have all the activities in summer camp along with Pelham United soccer and baseball. Lots of fun things going on” Smith said.

One of the best things about the YMCA is that the selection of activities is extraordinarily broad and it is never too late to sign up. “All camps are weekly based. You can come in week by week and sign up at different times,” said Smith.

All of the activities that the YMCA will be providing this summer have been previously kid approved, as the program does not stray away from what has been proven successful entertainment in the past. “Right now we have not added any new activities. We just try and stay true to what we know is fun,” Smith said.

Among one of the most popular of these activities is the “Navigators Program.” This group consists of second-eighth graders who engage in different activities everyday ranging from going to the movies to Camp Hargus. The prices vary depending on what programs you decide to sign up for. “Some are $110 a week and some are up to $165-$185 a week. It just depends on what the kids are doing. Field trips are more expensive than activities that stay on site more,” stated Smith.

The summer months are the peak financial season for the YMCA, which concludes a week before the new school year starts. “It lasts about 11 week’s total. Then we begin to transition back to our normal schedule,” Smith said.

In order to sign up this summer, your child must be at least five years old and potty trained. Children up to eighth grade are allowed to participate.

Spain Park alum drafted in second round of MLB draft

Mikey White, a Spain Park High School alumni, just finished his junior season at Alabama and was drafted in the... read more