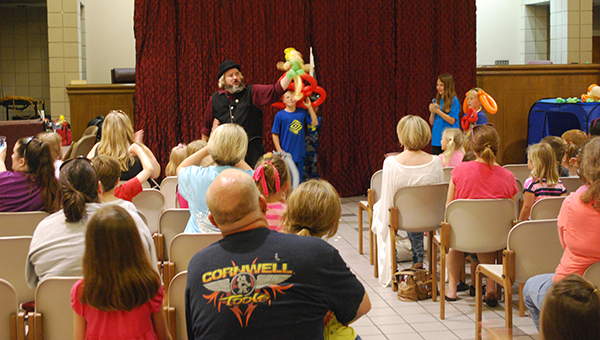 HELENA–Singing, dancing and a whole lot of balloons filled Helena City Hall on Wednesday, June 10, as the Jane B. Holmes Library Summer Reading Program was kicked off in style.

Dozens of kids were captivated by Dewayne Reynolds, who has been performing as a magician and balloon artist since 1998.

Reynolds performed his show titled “The Dr. Magical Balloons!” At 10 a.m. and 2 p.m., where he used a variety of balloon characters including heroes and villains such as Spider Man, Batman, The Joker, Darth Vader and more.

“This is my fourth year doing shows like this,” said Reynolds. “The theme today was every hero has a story. I took the basic 12 plot points to every hero’s journey and plugged in my characters. I wanted a bad guy who wanted to be Batman and wanted to fly and he broke in the story lens. That was the setup, everything else followed logically from that following the basic hero’s journey plot.”

Joseph Farley, an upcoming fourth grader, appeared in the show and played the character of Batman.

“I liked the dance part,” Farley said of the show. “I liked it, I liked the whole entire thing really.”

Numerous kids wore balloon hats depicting either a villain or super hero and they came together for a duel at the end of the show.

Reynolds said he pre-makes all of his balloons and will use them for about a week’s worth of shows and said it took him “five to six hours to make all the balloons for this show.”

Around 80-100 kids showed up for the morning show and roughly 60 kids were at the afternoon show, according to Helena Library Director Dan Dearing who described it as a “great turnout.”

When it comes to Reynolds’ favorite part about doing the magic and balloon shows, he said it’s definitely the kids who make it worthwhile.

“The kids’ reactions, when I get a wow or audible gasp, that’s the sweetest part of it,” said Reynolds.

The next summer reading program event will be on Wednesday, June 17, at 2 p.m. as the kids will get a visit from the Helena Fire Department at City Hall.

For more information on Dewayne Reynolds and his shows visit Dewaynereynolds.com.

Kids reach out to touch Fluffy the king snake during an Animal Super Powers presentation led by the Alabama 4-H... read more