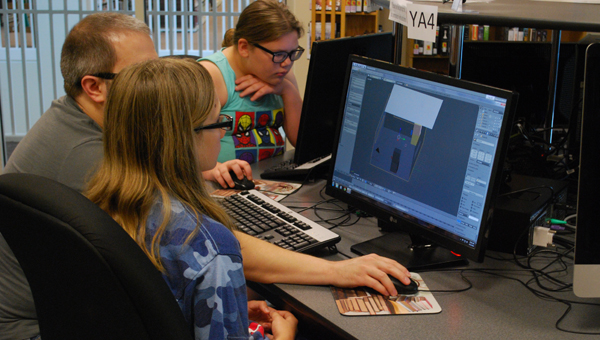 Courtney Cook works on animating a lightsaber duel between Luke Skywalker and Darth Vader on June 12 during a computer animation class at the North Shelby Library. (Reporter Photo / Molly Davidson)

“I’m making a fight between the Hulk and Thor,” Zuaiter explained. “You know how they don’t like each other.”

Students are tasked with creating a one-minute movie using Blender, a program similar to that used in the professional computer animation industry, Davenport explained.

“The kids have been picking it up pretty fast,” Davenport explained. “I’m excited to see the stuff they’ve come up with.”

The student movies vary, from Zuaiter’s Thor versus Hulk fight to a lightsaber duel between Luke Skywalker and Darth Vader animated by Courtney Cook. Students built each animation from the ground up, creating not only characters and motions, but also the setting and choosing the camera angle.

“They’ve made everything themselves,” Davenport explained. “You have to be the director, cinematographer, the lighting guy and the actors.”

Kids met for two and a half hours to learn about animation and work on their projects every day from June 8-12.

“It could take a long time,” Zuaiter said of animating his movie. “But, it’s worth it because it’ll be good for the people that watch it.”

Student videos will be screened at the end of the library’s summer reading program on July 24.

Although only a week long program, Davenport said he hopes the class will inspire the kids to continue computer animation.

“This gets your foot in the door, if you want to play around or (pursue) a career in animation,” Davenport said. “I try to give them some resources to look at. I try to give them as much as I can because I’m just here for a week.”

VIS participates in Pennies for Patients

Valley Intermediate School presented a check for $3,764.84 to the Leukemia and Lymphoma Society on June 2. (Contributed) By JESSA... read more