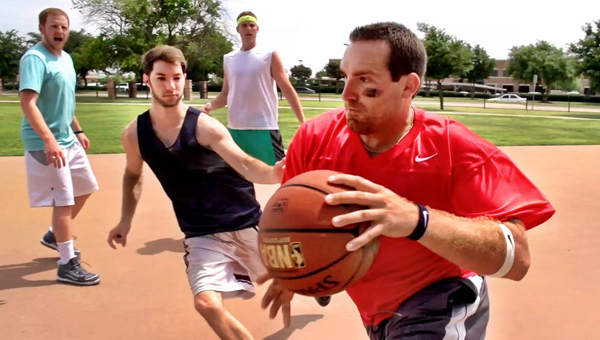 Its summer, which means its time for some pickup basketball. Here are some tips to ensure your trash talking game is at its peak. (Contributed)

Hey guys. Hope everyone is doing well. I come to you today as a friend, as an encourager, and most importantly as a teacher. It’s summertime, in case you didn’t know, and that means one thing above all others. It’s outdoor, pickup basketball season.

So much happens in pickup basketball games from a physical standpoint, but just as much, if not more, happens on the mental side. Basketball is, in fact, 10 percent physical and 90 percent mental. John Wooden said that, I think. You may have lost a step or two, but your mind is as sharp as ever. To highlight your strengths and hide your weaknesses, it’s imperative that your trash talking game is on point this summer to really help take your game to the next level. I’ve outlined just a few tips for you, free of charge, to utilize in your pickup life that are almost guaranteed to make you a force to be reckoned with. For you seniors out there, this applies double to you. Trash talking is, as they say, like a fine wine. It only get’s better with age, baby.

Here are five sure-fire tips to take you to the top of your trash talking game this summer.

1. The primary arrow in your trash-talking sheath is making sure everyone knows whoever is guarding you has no chance to cover you. Before the game starts, make a point to match up against the biggest, most athletic specimen on the other team and immediately make it known, loudly, that you’re about to drop 40. Lines like, “Really, this guy?” and “SHUTOUT” are going to be your bread and butter.

(The more incredulity you can muster at the disrespect the other team has shown you by putting such a low-class defender on you, the better. This will really help to create the power dynamic for the game to follow. Everyone knows you’re the top dog, and before the ball has even been tipped, whoever you’re matched up with is already rattled.)

2. Speaking of the tip, take it, especially if you are under 5-feet-8. Line up for the tip, scoff at the guy going up against you, continuing your pre-game superiority campaign, and then, when the ball is thrown up, don’t even jump. The guy across from you will undoubtedly spring up as high as he can, figuring you are Spud Webb reincarnate, and will look like an idiot when he realizes you’re already back on D, slapping the blacktop like Jon Scheyer, only good. This will also plant the seed in everyone’s head that you actually do have a 42-inch vertical jump, and will cause everyone on the court to tremble in their knockoff, Chinese Jordan’s when you come barreling down the lane later in the game.

3. The first time you touch the ball behind the 3-point line, blow an air kiss at your defender, launch a shot, and never break eye contact with that person. This ball has roughly a 6 percent chance of going in, but either way, they will be forced to respect your confidence, and they’ll be left thinking about that air kiss the rest of the game. On the off chance this shot actually finds the bottom of the net, immediately walk off the court, declaring the game is over and demanding the shirt off your defender’s back.

4. On defense, never guard anyone. Declare yourself a “rover” from the first possession, and concentrate your efforts on screaming high-pitched yelps in the direction of whoever is shooting. On the off chance you do find yourself guarding someone, immediately back up three steps, saying “I’ll give you that” or “NO CHANCE, NO CHANCE.” The shooter will be so embarrassed by your blatant lack of respect, they will either immediately pass or throw up an equally embarrassing brick.

5. Last, but not least, the game-winner. When your team is within a bucket of winning, it is your time to shine. Demand the ball on every possession, if your teammates will not acquiesce, it is completely acceptable, and in fact encouraged, to take the rock from them by force. Your team needs you, and you can’t risk an L with some no-talent hack taking your rightful shot. Pull up from anywhere and everywhere, the farther away from the basket and the more off-balance the better. As soon as you shoot, yell “GAME” and start walking off the court.

(Repeat this action until you either connect or the other team wins. If you win, stare into the very soul of your opponents and declare your athletic, social, and intellectual dominance over each and every one of them. On the off chance this strategy does not work and you somehow lose, blame each of your teammates individually, telling them how you’ve seen better basketball at a nursing home, then demand a rematch.)

These are just a few tips to get you going. Now get out there, you blacktop warriors, and make those dreams come true.

30 athletes in baseball and softball combined from Shelby County were named to the ASWA All-State baseball lists in their... read more