VIS participates in Pennies for Patients 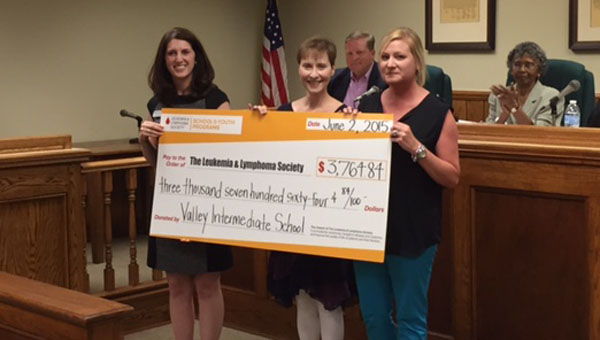 Valley Intermediate School presented a check for $3,764.84 to the Leukemia and Lymphoma Society on June 2. (Contributed)

PELHAM—The Pelham Board of Education recognized Valley Intermediate School on June 2 for raising more than $3,700 for the Leukemia and Lymphoma Society (LLS).

The donation was raised as a part of LLS’s Pennies for Patients campaign, and it was the first time Valley Intermediate School participated in this specific fundraiser. The school was ranked second among all schools in the Alabama/Gulf Coast region and first among first time participating schools in the region.

“It’s fun to try to get them outside of themselves and thinking about other people,” said VIS counselor Janey Patty. “Service projects are a great way to learn about giving back to the community.”

Communications manager for Pelham City Schools, Nicole Knight, said one of the school’s own was recently diagnosed with leukemia, so this fundraiser was a great tie into the school.

Pennies for Patients has been around since 1994. Students across the country collected spare change, made online donations, held talent shows, ran bake sales and partnered with community businesses during a three-week period to benefit the society. The class collecting the most change in each school received a pizza party.

“LLS contacted me last fall and Pennies for Patients seemed like a very worthwhile project especially since one of our own is being treated for leukemia,” Patty said. “I am so proud of our students for their efforts and their obvious generosity.”

This year, about 27,000 schools participated in the program and raised more than $28 million.

This isn’t the only fundraiser Valley Intermediate School participated in this year. Patty said the school usually sponsors one or two food drives for Oak Mountain Missions, annually sponsors a service project for Random Acts of Kindness Week in February and conducts other service projects for various charities throughout the year.

“They do seem to enjoy (the service projects),” Patty said. “Even when we make peanut butter and jelly sandwiches for Oak Mountain Missions, they just handle it with kindness in their hearts.”