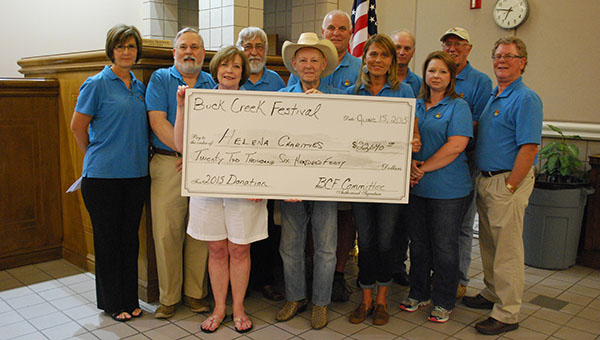 HELENA–Helena’s biggest festival of the year, the Buck Creek Festival, had its most successful year in nearly a decade after raising $22,640 in total funds, as the check was presented at the June 15 Council Meeting.

“We’re real excited about the results of the festival this year,” said Nelson. “We had sunshine and hot days and it made the best festival. All plans worked out perfectly and all the hard work that this group right here did for nine months of planning paid off. We’re so proud of what we have been able to accomplish.”

For the first time in two years, there was money left over to give out partly because of the nice weather that drew a larger crowd to this year’s festival.

“I’d like to say on behalf of the city, the festival brings a very positive and good light to our city and puts us in a very good image,” said Helena Mayor Mark Hall. “Not to mention the extra income it brings to the city during that time and people absolutely come back and visit.”

Some of the volunteer group work included picking up trash, concession stand duties, helping with crowd control, selling ducks for the duck race and just representing the city of Helena overall.

“The festival does not happen without volunteers,” said Nelson. “We have our main group of volunteers here that gets it going but we call upon the community to come in and help out and this year the volunteers went above and beyond what they normally do.”

Some of the notable donations the committee was able to give to the various groups included a $700 donation to the Helena Lions Club, $10,610 raised from the duck race by the Helena Band Boosters, $2,000 was raised for the Buck Creek Festival Scholarship Fund and $800 each was given to Helena High School, Helena Middle School, Helena Intermediate School and Helena Elementary School for a grand total of $3,200.

“We haven’t had numbers like this since 2005,” said Nelson. “We’re just so proud of what the festival does. I’m proud for the community and so appreciative of the committee members and how hard they work and I thank all the city officials.”