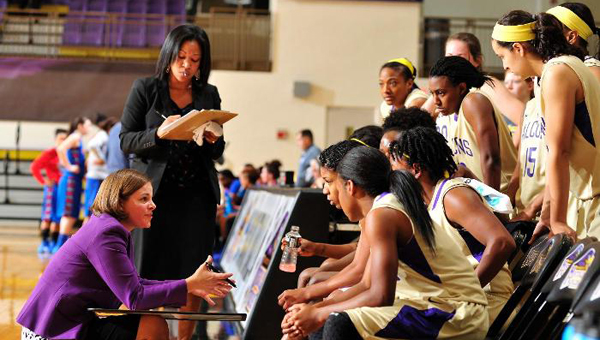 The Montevallo women’s basketball program has announce four new signees that will join the team for the 2015-16 season. (Contributed)

The Falcons’ four new signees include a NCAA Division I transfer and three junior college transfers. The class includes Tori Pharr, a transfer from the University of North Florida, along with Courtney McKenzie from Snead State Community College, Haven Albright from Wallace State Community College and Jazmine Stubblefield from Illinois Central College.

Pharr, a native of Covington, Ga., graduated from Newton High School in the spring of 2014 before redshirting during the 2014-15 season at North Florida. She will arrive at Montevallo as a freshman with four years of eligibility remaining.

The 6-foot-2 forward helped Newton High School to a Georgia High School Association Class 6A Sweet 16 appearance and a regional runner-up finish during her high school career while earning Most Improved and Best Defensive Player honors. Pharr was also a member of the National Honor Society.

McKenzie, a native of Dallas, Ga., graduated from Paulding County High School in the spring of 2011. She spent two years at College of Charleston before transferring to play one season at Snead State Community College in Boaz. McKenzie will arrive at Montevallo in the fall as a junior with two years of eligibility remaining.

The 6-foot forward redshirted during her first season at College of Charleston. She played in 24 games as a redshirt freshman during the 2012-13 season, averaging 1.6 points and 2.3 rebounds per game.

McKenzie averaged 12 points per game and seven rebounds per game during her senior season while serving as team captain. She was also honored with the Bobbie Bailey Award, which recognizes the achievements of local high school female athletes from 34 schools in Paulding County and surrounding counties.

Albright, a native of Lexington, Ala., graduated from Lexington High School in the spring of 2013. Albright spent the past two years at Wallace State Community College in Hanceville, Ala. Albright will enroll at Montevallo in the fall as a junior with two years of eligibility remaining.

Albright, a 5-foot-6 guard, played in 33 contests while averaging 13.9 points and 2.5 assists per game during the 2014-15 season as a sophomore at Wallace State. Albright shot 53.3 percent from the floor last season and helped Wallace State finish runner-up in National Junior College Athletic Association (NJCAA) Region 22 before helping the team advance to the second round of the NJCAA National tournament. Albright scored a career-high 28 points against Snead State Community College and dished out a career-high six assists against Wabash Valley College.

Stubblefield, a native of O’Fallon, Ill., graduated from Althoff Catholic High School in Belleville, Ill. in the spring of 2013. Stubblefield spent the past two years at Illinois Central College in East Peoria, Ill. Stubblefield will arrive at Montevallo in the fall as a junior with two years of eligibility remaining.

Stubblefield, a 5-foot-6 guard, has helped Illinois Central register a 56-8 record over the past two years. She played in 33 games while averaging 6.4 points and 4.6 rebounds per game during the 2014-15 season as a sophomore at Illinois Central. Stubblefield, who also averaged 3.7 assists per contest, scored a career-high 16 points against Pima Community College. She grabbed a career-best 10 rebounds against Lake Michigan College and Lake Land College while dishing out a career-high nine assists against  Danville Area Community College.

Stubblefield played in 31 contests and averaged 4.1 points to go along with 3.3 rebounds and 3.3 assists per game as a freshman during the 2013-14 season.

Montevallo’s Brown works out for Bucks