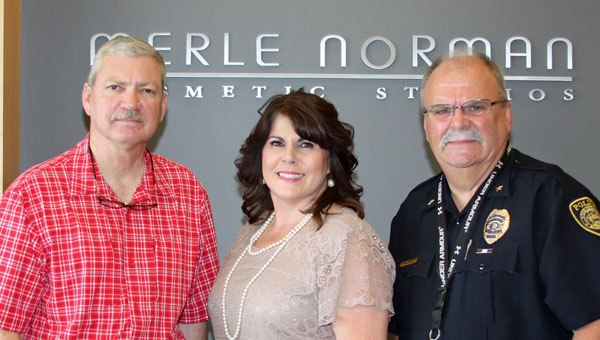 Pelham Police Chief Larry Palmer and Mayor Gary Waters presented Teri Blackmon with a certificate of appreciation for her assistance in a recent robbery. (Contributed)

PELHAM—Pelham Police Chief Larry Palmer and Mayor Gary Waters presented Teri Blackmon with a certificate of appreciation June 1 to honor her bravery during a robbery that took place April 2.

On April 2, Blackmon noticed a stranger, allegedly 61-year-old William Charlise Campbell, participating in some unusual activity near First Franklin Financial Bank. Blackmon continued to watch him, which is something Palmer said many people wouldn’t have done in that situation.

She notified the police before Campbell allegedly entered the bank, demanding money at gunpoint with a .38 special revolver. The suspect left on foot, and Palmer said responders were able to catch him because Blackmon notified them so early.

Police were able to apprehend Campbell in the alley behind the First Financial, and Palmer said no was injured during the arrest. Campbell was arrested on a felony charge of first-degree robbery. According to Alabama state law, first-degree robbery is a Class A felony. If convicted, the suspect could spend up to life in prison.

Palmer said he believes Blackmon’s actions led to the capture of the suspect.

“It was just a fantastic thing that she did,” Palmer said. “We couldn’t have been any happier. We just wanted to say thank you.”