The circus comes to Alabaster 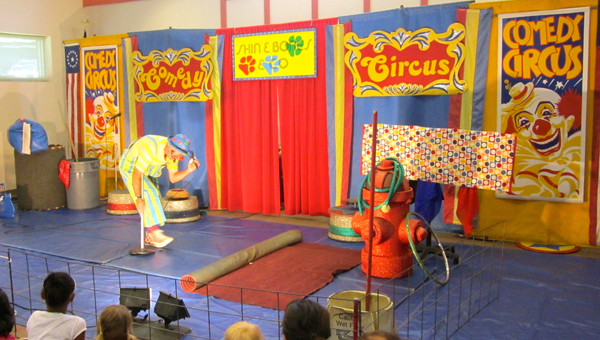 The Skin and Bones’ Comedy Circus came to the Albert L. Scott Public Library in Alabaster on June 15. (Special to the Reporter / Ginny Cooper McCarley)

By Ginny Cooper McCarley / Special to the Reporter

ALABASTER-What do a waltzing potbellied pig, juggling clowns and lots of laughter have in common? They could all be found at the Albert L. Scott Public Library in Alabaster on Monday, June 15, thanks to the Skin and Bones’ Comedy Circus.

The act, which has performed at the library several times before, is “always a hit,” according to youth services librarian Frances Smith.

Bob and Mariah, the professional clowns behind the Skin and Bones’ Comedy Circus, juggled, performed sleight-of-hand magic tricks, and impressed the crowd with the antics of three trained dogs and a trained potbellied pig.

One of the most popular performers was a black and white Dalmatian, whose hijinks garnered much laughter and applause from the crowd of kids.

“The animals are the real stars of the show, presenting several different turns,” according to the Skin and Bones’ Comedy Circus website.

The library has multiple programs nearly every day of the summer for kids of all ages, including story hours, drama workshops, “Maker Monday,” and a weekly lego league.

“The programs supplement the reading challenge that the kids sign up for,” Smith said, noting that more than 600 kids have already enrolled in the summer reading series.

This year, the summer reading theme is “heroes,” and the motto for the younger kids is “every hero has a story,” Smith said.

During the summer programs, books pertaining to each program line the top shelves of the library, so that children can read more about what they have experienced.

For more information on summer programs at the library, visit Cityofalabaster.com/departments/library.