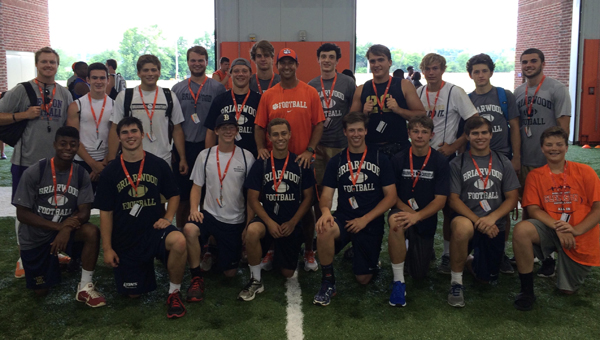 CLEMSON – Pelham High School alumni and current Clemson head football coach Dabo Swinney holds high school camps every summer. Last season, Briarwood parent Brad Gray took his son, William, to the camp, and Gray felt the camp was so well run that they decided to go back this season, with a few more teammates in tow, 16 more in fact.

Swinney played his college ball at the University of Alabama, where he earned a scholarship as a wide receiver before becoming the receivers’ coach for the Crimson Tide after his graduation. From there, he eventually made his way to Clemson and became the interim head coach halfway through the 2008 season when longtime coach Tommy Bowden stepped down. He was awarded the job for the start of the 2009 season, and has amassed a 57-23 record since, winning 10 or more games the last four seasons. He has a reputation for being a top-level recruiter and has brought multiple high-caliber recruiting classes to Clemson in his time.

The high school camps are something Swinney has been doing for as long as he has been at Clemson, Gray said. This year, the first camp, the one Briarwood went to, lasted from June 8-10 while the second lasted from June 12-14. After his son’s experience last year, Gray said he “was so impressed with the quality of the camp (he) wanted to open it up to more kids.” Briarwood head coach Fred Yancey gave his endorsement for the camp, telling whoever wanted to go that they could join the Grays.

The camp consisted of multiple practices per day, each consisting of skill work and 7-on-7 competition or skeleton periods.

Gray said there were over 500 participants at the first three-day camp from all over the country, and the skills drills and scrimmages were very competitive.