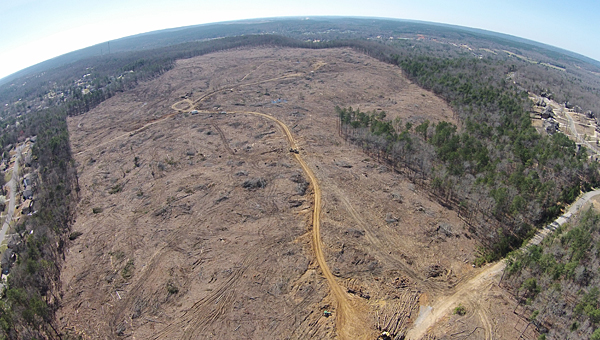 The Alabaster School Board approved a site package and mass grading project for the site of the new high school during a June 16 special-called meeting. (File)

ALABASTER—The Alabaster School Board took another step toward constructing a new high school, approving a site package and mass grading project for the school construction site during a June 16 special-called meeting.

The School Board unanimously approved the $9.8 million low bid from Mississippi-based Eutaw Construction.

“This is… all the dirt moving for our new high school site,” Vickers said. “We’re excited for what’s going to be happening.”

Throughout the mass grading project, an estimated 85,000 truckloads of dirt will be moved on the 300-acre parcel of land that will house the new high school, School Board President Adam Moseley said.

The school is expected to open in the fall of 2017, and at roughly 384,000-square-feet, it will likely be the second largest in the state. The school will house at least 2,000 students, Vickers said previously, and will include a 1,250-seat theatre, three gyms including a 2,000 seat main arena, a golf practice facility, a regulation track and more.

The School Board is expected to bid the construction project in August, Vickers said.

The $9.8 million site package and mass grading project is part of the school system’s estimated under $90 million budget for the new high school construction project.