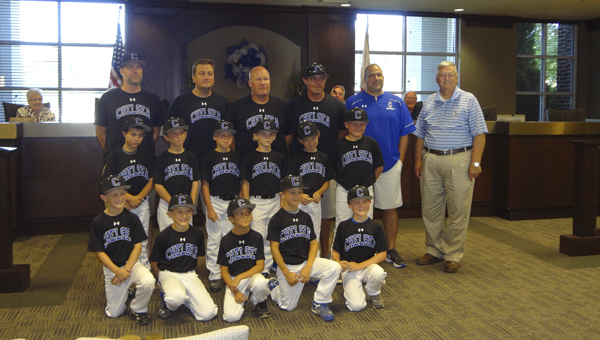 The 8U Chelsea Pain Train baseball team was recognized during a Chelsea City Council meeting on June 16 for winning the Academy Sports Invitational the weekend of June 13 and 14. (Reporter Photo/Emily Sparacino)

CHELSEA – Chelsea City Council members passed a resolution to reinforce a waterline near the parking lot of the Chelsea Youth Fields on Shelby County 47 at a meeting June 16.

The council accepted a $14,450 bid from Bama Utility Contractors, Inc. for the installation of a steel casing around the waterline in the right-of-way on Shelby County 47, next to the ball field parking lot, in compliance with Shelby County Water.

Mayor Earl Niven said the reinforcement of the waterline was necessary in protecting it and preserving the city’s clearance to use the parking lot, which accommodates large crowds attending sporting events in Chelsea, including the Academy Sports Invitational.

“If we didn’t have this parking lot this past weekend, we wouldn’t have a tournament,” Niven said. “We have to go under the directions of Shelby County Water.”

The 8U Chelsea Pain Train baseball team was recognized during the June 16 meeting for winning the Academy Sports Invitational the weekend of June 13 and 14, the team’s third tournament win this year.

“This is a special group of kids,” Councilman David Ingram said. “If they keep working, they’ll make a run at the state championship.”

In other business, the council approved bids totaling $17,720 from Shirley Brothers Excavating, Inc. and Con-Site Services, Inc. to resolve erosion issues at the city’s sports complex being constructed off Shelby County 11.

“Due to heavy rain that’s been falling the last month or so, some corrections need to be made,” Niven said, noting extra silt fence and riprap would be installed. “It’s really not the water that’s causing the problem; it’s the sediment the water carries.”

The corrective measures will satisfy the project’s erosion problems in keeping with Alabama Department of Environmental Management regulations.

The council also:
•Heard from a concerned resident regarding motorists speeding and causing other issues on the road behind the senior center.
•Heard from a member of the Foothills Point HOA regarding a pothole at the entrance of the neighborhood.
•Recessed to travel to the Chelsea Community Center for a brief tour before adjourning.

The Alabaster School Board approved a site package and mass grading project for the site of the new high school... read more