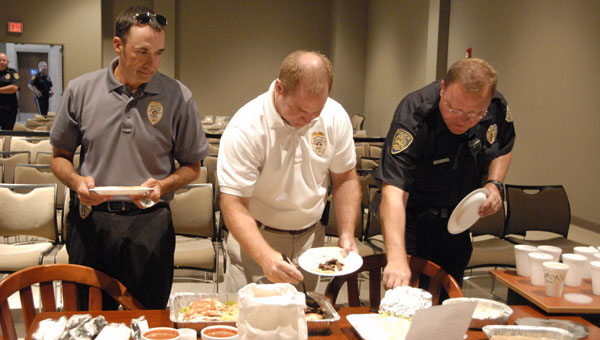 PELHAM—Several months ago, Marilyn Seier started to notice the negative press that police officers were receiving and wanted to do something to counter it.

“I’ve lived in Pelham for 30 years and I have had absolutely fabulous, professional help from the police force,” Seier said. “I wanted to show my appreciation to the police department in Pelham.”

From helping her change a flat tire that blew out on U.S. 31 to responding to her call at 3:30 a.m. when someone knocked on her door and scared her, Seier said the Pelham Police Department has always been there when she needed them. So as an agent with the RealtySouth office off Acton Road, she partnered with RealtySouth’s Pelham office to provide meals for the department’s three shifts June 16.

With catering by Margarita Grill in Pelham, Seier was able to help provide lunch or dinner for the officers at 11 a.m., 5 p.m. and 9 p.m. She was at each of the shift changes to personally thank everyone for their service.

“We really appreciate it, and we appreciate it because it lets us know that the community does care,” said Pelham Police Chief Larry Palmer. “That’s what we want to be a part of. You’ll hear me say it many times — I’ve said it before and I’ll say it again — we are part of the community.”

The gesture means a lot to the officers working at the department, Palmer said. It brightens their day, he said, calling the day in the office “a good one.”

“These guys, they look forward to this kind of stuff and anytime they can interact with the community,” Palmer said.  “Just unlimited thanks for this. It’s really appreciated.”

Chandler to speak at first IgniteCon

Inverness resident Dustin Chandler will be a featured speaker at this year’s IgniteCon on Aug. 13. (Contributed) By MOLLY DAVIDSON... read more