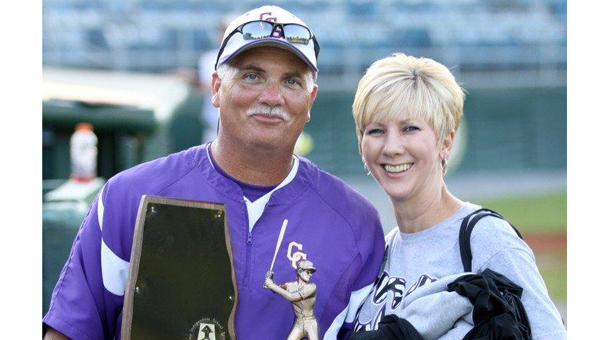 Tim Smith, shown here holding the 2012 AISA A baseball state champhionship trophy, is the head baseball and football coach at Cornerstone Christian School and has served as the school’s only athletic director for 18 years. (File)

It’s quiet today outside the little school off AL-25.

The old, faded grandstand keeps watch over the empty football field enclosed by chain-link fence. The basketball gym is hot, dark and smells of floor cleaner and the baseball field hasn’t seen any action since the disappointing season ending series over a month ago. There is some activity in the school itself, children being led around for a summer program, but overall, it is quiet. Summer is in full swing here, and hot, thick air will be the only consistent resident at Cornerstone Christian School over the next few months.

On this day, Tuesday, the football team is finishing up early morning weightlifting. This is the first year they have switched to morning workouts as opposed to afternoons, and the turnout has been good so far. Some are waiting for rides, some are chatting. The vibe is relaxed and comfortable, and no one questions an outsider walking into their midst from the gravel parking lot. I’m led to the back of the relatively barren building, and told to come in to the back office immediately. A browned, kind, mustachioed face awaits me, and tells me to come on in.

Tim Smith is the patriarch of Cornerstone sports. That’s the only word for it. There is no athletic history at the school that is separate from the narrative Smith has woven there. He came to the school 18 years ago; a year after the school itself was founded, and became Cornerstone’s first athletic director, a position he still holds today, amongst others. He has overseen the construction of the entire athletic complex and has cultivated the entire athletic program from nothing.

The reason for my visit on this hot Tuesday morning in the middle of June is because of an oversight. Smith has been named one of 12 people to be inducted into the AISA 2015 Hall of Fame class. This announcement happened roughly a month ago, and I was unaware until recently.

When Smith first told me the news over the phone, he delivered it in the single most humble way I have ever heard one man describe winning anything, and told me to call the school if I wanted more information. I asked if I could come out to the school and talk to him about his award, and an hour later I was in his office.

What started as a simple report turned into something else.

From the first moment in his office, Smith is disarmingly kind. It’s tough to say much about his Hall of Fame induction because he doesn’t know much about it himself. He got a call from the AISA office the last week of school congratulating him for winning something he didn’t even know he was up for, and he isn’t sure when the ceremony will be. It’s in Montgomery, and it’s black tie, he thinks. He said that, frankly, the award is a little embarrassing, and the kids that have filled his rosters over the years are the reason why any of this is possible. It becomes apparent, very quickly, that the man just wants to talk. Not about himself, but about the school he has helped form.

When he first got arrived at Cornerstone, there was nothing. He speculated there might have been a basketball team that played a handful of games the year before he got there, but for all intents and purposes, the athletic canvas was blank. They had a football and a basketball team in Smith’s first year, and it was a tough start.

Before football practice, the kids would have to walk around the makeshift practice area and pick up rocks before they could start. For basketball, his first couple of teams practiced outside on a slab of blacktop when it wasn’t too cold or wet, and when it was they would practice on a half-gym at a Baptist church in Wilsonville or wherever else they could find space. Smith, who had never been an athletic director before and was working maintenance for the Housing Authority before he was approached for the Cornerstone job, was figuring out what to do as he went.

Eighteen years, 10 state championships, and an entire athletic complex later, its safe to say Smith has it under control.

The story of how he built the football field, followed by the baseball and softball fields and finally the basketball gym, is too long to tell here. I wish I could talk more about how all the students gathered around the gym every week, when it was just a slab of concrete, and prayed that God would provide the means to complete the structure, but there’s not enough space. There is space only to say Smith, and the Cornerstone community, took an empty, rocky field and turned it into something special through nothing more than time and effort.

Because of this, Smith will be inducted into the AISA Hall of Fame, all he has to do now is find a bowtie.

We get really caught up with scope in our sports culture. The bigger, the louder, the better. What Smith has built is not that big and not that loud, but rather is a tight-knit, competitive structure dedicated to its players, and it’s hard to say that’s not better.