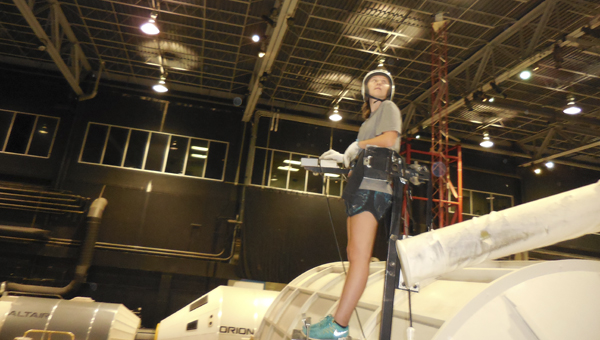 Emily Gerardo of Hoover trains for a mission on the Canada Arm at Space Camp at the U.S. Space and Rocket Center in Hunstville. (Contributed)

The weeklong educational program promotes science, technology, engineering and math (STEM), while training students and adults with hands-on activities and missions based on teamwork, leadership and decision-making.

A student at Spain Park High School, Gerardo was part of the Advanced Academy Program, which is designed for high school students who have a particular interest in science and aerospace.

Trainees spent the week with a team that flew a simulated Space Shuttle mission to the International Space Station (ISS).

Once aboard the ISS, the crew participated in experiments and successfully completed an extra-vehicular activity (EVA), or space walk.

Trainees received college credit for participating in the program.

Gerardo and crew returned to Earth in time to graduate with honors.

Space Camp and Aviation Challenge crew trainers who lead each 16-member teams must have at least a year of college, and 67 percent of the staff are college graduates.

Students sleep in quarters designed to resemble the ISS and train in simulators like those used by NASA.

Nearly 700,000 trainees have graduated from Space Camp since its opening in Huntsville in 1982, including STS-131 astronaut Dottie Metcalf-Lindenburger.

A rendering of Calera’s new city hall, created by architect Stephen Coker, that should be complete by April 2016. (Contributed)... read more