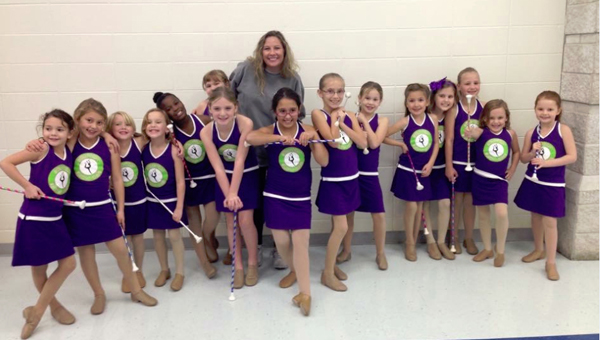 Dana Gsell, in back, has been enthralled with the baton from an early age. She teaches chirldren from Kindergarten up through high school in Shelby County. (Contributed)

By: Joseph Antonio / For the Reporter

Dana Gsell has had an ardent enthusiasm for baton since she was six years old. In fact, her fervor for the sport began while she was attending a local football game at McAdory High School.

“My brother played in the band there and after seeing the majorettes I told my mom I had to have lessons and it has stuck ever since,” said Gsell.

After gaining many adept skills after years of hard work, Gsell taught baton part time on the weekends during college and, since the fall of 2007, she has been committed full time to her passion.

Among her different types of clientele, Gsell predominantly teaches at a few of the Shelby County Schools. Among the schools where she offers her services are Forest Oaks Elementary, Calera Elementary and Calera Intermediate. The students are taught baton basics among other things.

“We focus on one baton tricks and twirls, but we also offer lessons on multiple batons,” Gsell said.

Overall, she offers classes to students aged Kindergarten to high school and helps older students prepare for competitions and high school try outs. All in all, she teaches around 100-120 students.

In fact, some of her past students have competed in the national Miss Majorette Of Americacompetition held at the University of Notre Dame. This competition, on average, brings in thousands of ambitious young twirlers each year. “It’s a week-long contest and people from all over the country and overseas come to compete,” Gsell said.

Gsell also talked about how she could not name only one thing in particular she likes best about baton. “It’s just something I’ve always done. There is nothing I don’t like about baton,” she said.

According to Dana, it is more rewarding than difficult when it comes to instructing her littlest pupils. “It’s good to see them gain confidence they didn’t have before and to become more confident in themselves,” she said.