Ready to jump? Skydive 4 CDKL5 returning for a third year 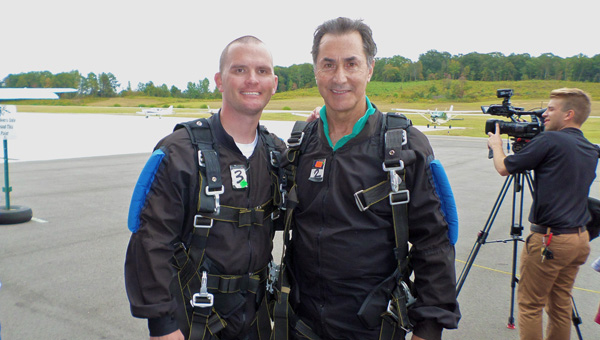 Dustin Chandler and Gary Palmer return after jumping out of a plane during the Sept. 27, 2014 Skydive 4 CDKL5 event at Skydive Alabama. (File)

HOOVER—Jumping out of a plane is a once-in-a-lifetime thing for many people, but Inverness resident Dustin Chandler is gearing up for his third 14,000 foot jump during the third annual Skydive 4 CDKL5-Courage for Carly fundraising event.

This year’s event will take place at Skydive Alabama in Cullman on Sept. 26.

Skydive 4 CDKL5-Courage for Carly raises money for CDKL5 research. With only 600 documented cases worldwide, including Chandler’s 4-year-old daughter Carly, CDKL5 is a rare neurological disorder that often causes seizures and impaired neurological development. Many children suffering from CDKL5 cannot “walk, talk or feed themselves, and many are confined to wheelchairs, dependent on others for everything,” according to the International Foundation for CDKL5 Research. There is no known cure or treatment for CDKL5.

Over the past two years, the skydiving event has raised nearly $70,000 to fund research for the rare disorder.

“It’s a tough thing to let people know how difficult it is to fund research,” Chandler said. “(The money raised) is going to research, it helps fund the research to find cure and find treatment for these kids with CDKL5.”

Raising money is only part of Chandler’s goal. The annual event brings the community together and, most importantly, raises awareness for CDKL5, Chandler said.

“It takes jumping out of a plane sometimes to bring attention to rare disorders,” Chandler said. “It brings the energy and focus to the disorder… Just bringing that awareness to a rare disorder is very important.”

Several families of children with CDKL5 will travel from as far as California, Arizona and Connecticut to be at this year’s event, and Chandler said he hopes to see even more people come out to support and raise awareness for CDKL5 research.

“We consider each other family,” Chandler said of the CDKL5 community.

The full day event will be fun for everyone, even those not planning to jump, Chandler said. In addition to skydiving, there will be live music and food throughout the event.

For more information and to donate to the cause, visit Gofundme.com/courageforcarly.

A Helena Fire Explorer dresses up in a complete fire suit to show kids attending the summer reading program what... read more