Tennis a family affair in the Wolf household 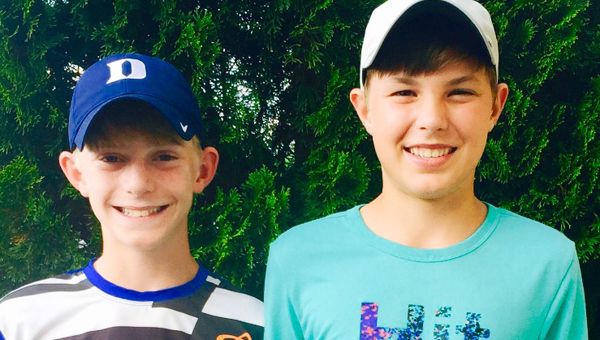 Luke Wolf, left, and John Wolf are brothers who attend the Westminster School at Oak Mountain and play tennis. Both competed in the Southern Section tournaments for their respective age groups recently, and both performed well. (Contributed)

Tennis is a big deal in the Wolf household. Luke and John, brothers separated by only 15 months, have had racquets in their hands for most of their young lives, and already are showing a prodigious skill for the sport.

The Wolfs moved to Birmingham from Texas about 16 years ago, according to their mother, Johnnie. She explained that after John was born, she picked up the sport and soon wanted to pass it on to her son.

“After I had John I picked it up and liked it,” Johnnie Wolf said. “I wanted them to play. They started out when they were young and did baseball and basketball as well as tennis. Over time Luke dropped everything except tennis, and John still did travel baseball but eventually got burned out and moved to just tennis.”

The two have been making waves in the Alabama youth tennis community. The Alabama state qualifier feeds into the Southern Section tournament, which pits the top-12 finishers in the qualifier and sends them to compete against athletes from nine other Southern states. Both Luke and John qualified in their respective age groups, Luke, still in the 12 and under division, and John, who has now moved to the 14 and under division.

The Wolfs are no strangers to the road; Johnnie estimates they travel thousands of miles a year for their sons’ tennis tournaments. Both boys play for the Westminster School at Oak Mountain tennis team and helped the Knights to a second place finish in last season’s 1A-3A tennis state tournament. Both boys will continue to play for the Knights and in the schools offseason to continue to improve and hopefully one day earn a college scholarship.