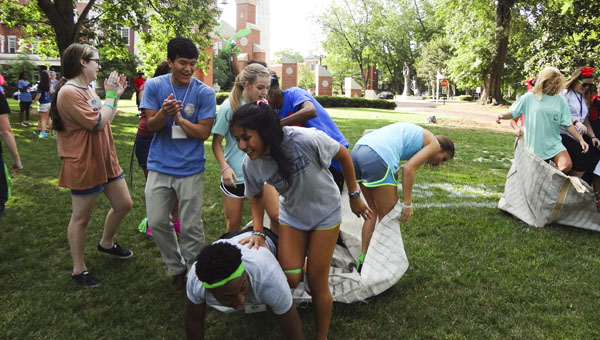 High school students involved in this year’s Walsh Academy of Leadership finish a team sack race during an “Amazing Race” competition on the University of Montevallo campus. (Reporter Photo/Emily Sparacino)

MONTEVALLO – More than 40 high school students competing in team-building events on the University of Montevallo’s main quad June 18 could have passed for longtime friends.

Most of the students, who are participating in the fourth annual Walsh Academy of Leadership, had only known each other for a few hours before they were divided into groups for the “Amazing Race” competition on the quad.

“That’s a big focus of the WAL – building relationships,” Libby Holmes, with the Youth Leadership Development Program, said. “(It is) teaching them they can make friendships and relationships with anyone if they are willing to cross those lines and break those barriers.”

The WAL is a three-day, two-night leadership experience and summer camp for rising juniors and seniors representing 45 high schools, colleges and universities in Alabama.

The WAL, an initiative of the Greater Alabama Council and its partners, is named in honor of Dr. Kevin Walsh, founder and executive director of the Alabama Youth Leadership Development Program.

“This is our fourth annual (WAL), and it’s going strong,” Holmes said. “It’s really cool how everything has come together.”

As a result, hundreds of young people have come together at the camp.

For Lydia DeHart and Sydney Bell, this summer marks their second WAL experience.

“We absolutely loved it last year,” DeHart, a rising senior at Thompson High School, said. “Although it’s a really short time, you make those bonds. You become a family.”

Bell, a rising senior at Chelsea High School, said the camp instills “a great sense of teamwork and how to work with people you don’t know.”

Brandon Johnson, who will be a junior at McAdory High School, suggested the camp be extended to a week.

“When I first came here, I was a little nervous about not knowing anybody,” Ian Roskam, a rising senior at Spain Park, said. “It teaches you so much stuff about leadership.”

Roskam’s sister, Crystal, is a fourth-year WAL counselor and a senior at the University of Montevallo.

Roskam is one of about 16 counselors from UM, Jefferson State Community College and other area colleges working at this year’s camp.

The camp kicked off June 18 with introductions, a tour of the UM campus and speakers.

Elliot Spillers, the University of Alabama’s SGA president and WAL and YLDP alumnus, spoke to students before their evening activities.

Camp will close June 20 with graduation and a keynote speech from Walsh, followed by a reception.

“It’s a really great networking tool for them,” counselor Chris Patillo, a junior at UM, said of the camp’s impact on participants. “It’s great for self-esteem and getting people to open up and find their way.”