Passion for singing leads to opportunities for Helena freshman 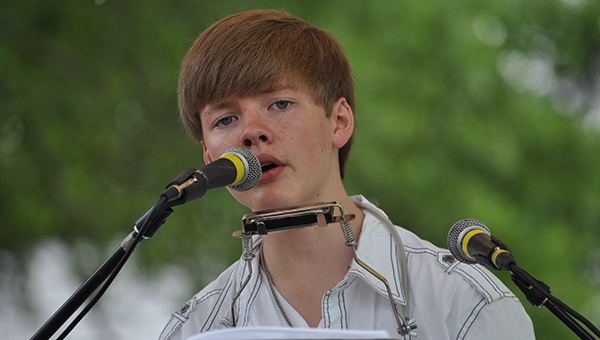 Upcoming Helena High School freshman Jordan Narkates has a talent for singing that has led him to numerous opportunites, including singing the National Anthem for the Birmingham Barons. (Contributed)

HELENA–Not many people can say they’ve performed the National Anthem in front of thousands of people, but soon-to-be ninth-grader Jordan Narkates has done that and much more, thanks to his talented voice that recently brought him across Europe on a tour with the Birmingham Boys Choir.

Narkates recent took a tour through Europe that included stops at Amsterdam, The Czech Republic, Germany and more where Narkates and the other 39 or so members of the Birmingham Boys Choir sang at churches and went on various tours.

The Birmingham Boys Choir is under the direction of Ken and Susan Berg, and on the weeklong trip the boys were split up into groups of soprano, alto, tenor, baritone and bass when they performed.

When asked when he first realized he was good at singing, Narkates said it was coming home from a trip to Washington D.C.

“This is going to sound weird, but I was in fifth grade and we were coming home from Washington D.C.,” said Narkates. “They had karaoke in the front of the bus and I had a bunch of friends tell me ‘hey you should go do it.’ At first I was like no I don’t sing in front of people, and they offered to pay me to go sing so I said ok. I went up there and started singing and then everybody noticed how good I was. I said I was still going to join band but then they convinced me to join choir.”

Since realizing he had a talent for singing, Narkates sang the National Anthem for the Birmingham Barons last year and will do so again this year on July 6.

After the trip to Europe, Narkates felt like he came back with more knowledge about other cultures.

“I felt very cultured when I came back just getting to hear the music over there,” said Narkates. “I just learned a lot from the experience.”

“We really stand in awe at all these opportunities that have kind of fallen into place,“ said Narkates mother Missy Narkates.

In the upcoming year, Narkates plans to join the show choir at Helena High School, learn acoustic guitar and continue to participate in the Birmingham Boys Choir and student ministry at a2 Church.