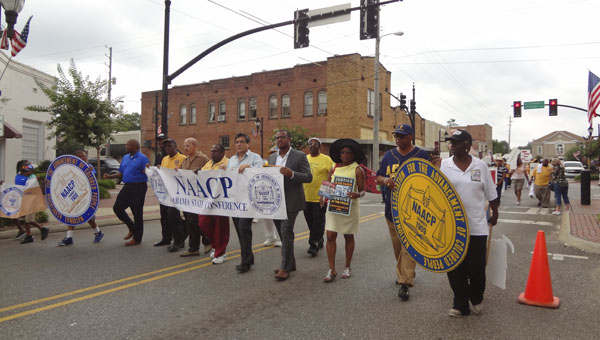 Dozens of people participated in the Alabama State Conference of the NAACP’s first “Restore our voting rights rally and march” on June 20 in downtown Columbiana. (Reporter Photo/Emily Sparacino)

COLUMBIANA – The message of reinstating equal voting rights to all American citizens permeated downtown Columbiana as intensely as the hot summer sun shining down on those who gathered to show their support June 20.

Dozens of people, including leaders and members of the NAACP, the Beta Mu Nu chapter of Shelby County’s Omega Psi Phi Fraternity Inc. and other state and national organizations, walked along Main Street to the Shelby County Courthouse as part of the Alabama State Conference of the NAACP’s first “Restore our voting rights rally and march” in Shelby County.

“It’s our God-given duty to stand and speak out,” Rev. Kenneth Dukes, president of the Shelby County NAACP chapter, said, “To have the right to life, liberty and the pursuit of happiness. The struggle continues.”

The three-day series of events June 19-21 was designed to emphasize the importance of restoring equal voting rights through new legislation, and to honor the efforts of civil rights advocates who risked or lost their lives in demonstrations in Selma, Birmingham and other racially segregated cities during the 1950s and 1960s.

“We’re not knocked out because God has given us the privilege and the opportunity to make a difference in this world,” said Everett Kelley, national vice president of the American Federation of Government Employees. “Brothers and sisters, we have to understand that we still have work today. We’ve got to teach our young folks to speak loud. We don’t have to fight back with guns and knives.”

Speakers at the June 20 rally noted the impact that violent events––from Bloody Sunday in Selma in 1965, to the June 17 church shooting in Charleston, S.C.––have had on black Americans and the rest of the nation.

“Fifty years later, we are still in bondage here in America,” Jerry Henderson of the Pike County NAACP said. “Racism is alive in America as it was back then. We have to build a movement in this nation that crosses racial lines, religious lines, ethnic lines … because the legislation is hitting all of us.”

Henderson and others were referring to the United States Supreme Court’s Shelby County v. Holder ruling two years ago that struck down the preclearance provision of the Voting Rights Act of 1965 that required Shelby County and cities and counties in 16 states with histories of racial discrimination to obtain federal approval from the Department of Justice before changing voting procedures or electoral maps.

This summer’s voting rights events were also fueled by an incident related to voting districts in Calera.

The new voting districts eliminated the only black majority voting district, and Calera City Councilman Ernest Montgomery, a black man, lost his seat by a handful of votes.

The federal government refused to certify the results, and Montgomery won a seat on the council after the city held another election.

Shelby County challenged the constitutionality of sections 4b and 5 of the Voting Rights Act in 2010, arguing progress had been achieved since the act took effect.

“Section 5 of that act was the crown jewel of American democracy,” Deuel Ross with NAACP legal defense said. “It’s been so effective, but I want you all to take a step back. Injustice has again reared its ugly head.”

The Supreme Court’s final ruling on the challenge in Shelby County v. Holder in June 2013 marked the end of a three-year process, as well as the continuation of Alabama and other states lacking preclearance.

“This determination is personal for me,” Montgomery said. “We believe what happened in Calera in 2008 was sort of the groundwork … We won’t be satisfied till there is restoration to the Voting Rights Act.”

“We are gathered here today in Shelby County not to start a journey, but to continue a journey that our ancestors started nearly 400 years ago,” Arrington said. “We have begun another leg of an oftentimes very bitter journey to the land of American citizenship.”

“I want you all to know that black lives matter, but black votes also matter,” Ross said. “We will not sit idly by while our right to vote is trampled on.”

Passion for singing leads to opportunities for Helena freshman