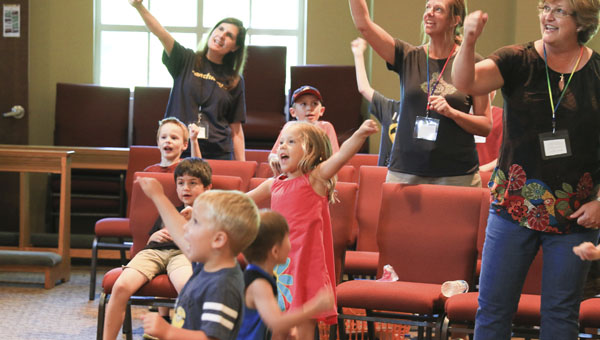 Children sing and dance during Celebration Time at Vacation Bible School on June 17 at Morningstar United Methodist Church in Chelsea. (Special to the Reporter/Dawn Harrison)

CHELSEA – Morningstar United Methodist Church was buzzing with activity last week as about 40 children flocked to the campus for Vacation Bible School.

On June 16-18, children from 3 years old to sixth grade sang songs, learned Bible verses and made crafts each night during this year’s VBS, “Hometown Nazareth, Where Jesus was a Kid.”

Shelley Puckett, wife of Morningstar UMC’s pastor, Rev. Mark Puckett, said the mission behind the theme was “to help the kids know that Jesus knows what it’s like to be a kid, and to help them understand why Jesus came to earth.”

“We’re a small church, but I love VBS because we can come together,” volunteer Michelle Griswold said.

Children were divided into tribes of Israel, Griswold said. Following celebration time each night, they made different crafts in the Marketplace; played Bible-times games; visited with Jesus’ mother, Mary, who told them a Bible story about Jesus as a child; and eat dinners provided by the church’s Sunday school classes.

Griswold said the children made sun catchers in the “Serve Shop” one night for residents at Hidden Acres, an assisted living facility in Chelsea.

“Each night, the shops have different names,” she said, adding the Carpentry Shop was where the kids made wooden crosses to take home.

Davis O’Connell, 11, said he has attended VBS since he was about 3 and enjoys several parts of the experience.

“I like singing, dancing,” O’Connell said. “I look forward to the games.”

Madelyn Jacobs, 6, said she liked making her Armor of God necklace in the “Bead Bazaar” shop.

Between 30-40 teen and adult church members volunteered throughout the week.

The church also held a competition between girls and boys to collect a mile of nickels (about 73,000 nickels) through offerings for its global mission in Guatemala called Eyes Wide Open.

At last count, about 10,000 nickels had been collected.