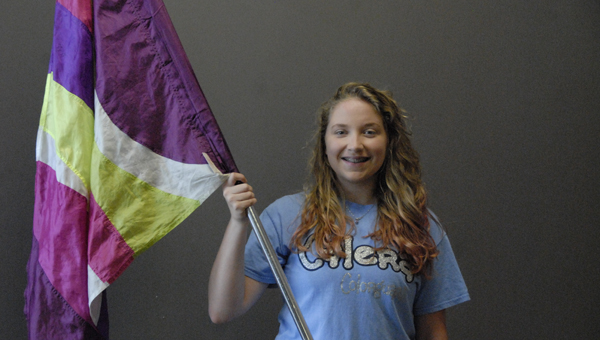 Kaycee Lollar was accepted as a member of the Macy’s Great American Marching Band and will perform in New York City on Thanksgiving. (Reporter Photo / Jessa Pease)

CALERA—Millions of people gather to watch the Macy’s Day Parade on Thanksgiving. This year, one Calera High School student will be participating in the parade herself.

Kaycee Lollar, a soon-to-be senior at Calera, was recently accepted into the band’s color guard. Only 250 high school students around the United States are accepted into this band and Lollar is one of only 20 color guard members.

“I’m very excited. We get to go and spend a week there, so it’s not just going for the parade,” Lollar said. “I’m really excited to just meet people who do what I do and love what I do. We all love the same thing. I’ve never been to New York. It’s just all something new.”

Lollar auditioned for the position by posting a try-out video to Youtube. She performed some basic moves to Imagine Dragons’ “Gold,” and she also performed her captain try-out routine to “Avalanche” by Walk the Moon.

When she was accepted, Lollar said it didn’t feel real.

“I opened the letter and it said, ‘Congratulations,’ and it wasn’t like ‘Oh my gosh I made it,’ Lollar said. “It hit me after that.”

It wasn’t until she started thinking about the funding for the trip, that Lollar said it really felt like the trip was happening. Needing a down payment, monthly payments of $340 and a round-trip ticket to New York, Lollar and her parents started a GoFundMe account to help. Her goal was $2,500, and Lollar said she only needs two more payments and the plane ticket as of June 22.

“It’s crazy because some (people who have donated) I haven’t heard from and I don’t see,” Lollar said. “One of my mom’s really close friends, that I’ve seen three times in my entire life, paid our entire July payment.  It’s really cool that people would want to do that just to help me.”

As a member of the Macy’s Great American Marching Band, Lollar will be performing in front of about 7.5 million people, 2.5 million live viewers and 5 million watching on television. She isn’t nervous though.

“I don’t get nervous about performing or things like that, so I won’t be nervous,” Lollar said. “I like performing. I like being in front of people and being like look what I can do. It’s my favorite part — just performing on Friday nights.”

Lollar will serve as Calera High School’s color guard captain as she completes her last year. She said she’s excited to assume a leadership role and to come up with her own routines to perform at pep rallies.

She plans to attend the University of South Alabama next year, pursuing a music related career. As a “band geek” she wants a job where she can stay close to the marching band.