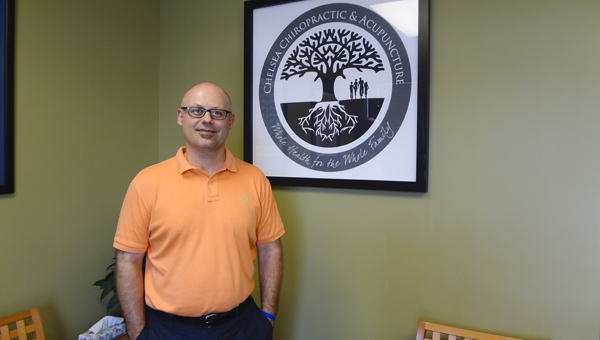 CHELSEA – Dr. Justin Fogo of Chelsea Chiropractic was named the Alabama State Chiropractic Association’s Chiropractor of the Year during the ASCA 2015 Convention in Florence earlier this month.

Fogo, 42, was among three nominees for the award, which is one of several ASCA Merit Awards given each year based on member nominations and voting.

“What’s nice about it to me is the recognition from my colleagues and peers,” Fogo said of the award. “It means more to me that it’s coming from them more than anything else. It was a really nice surprise.”

According to the ASCA website, the Chiropractor of the Year award is given in recognition of an outstanding year of service to the profession. There are no limitations on age or years in practice for recipients, who must be an ASCA member in good standing and have been for at least the past three consecutive years.

In 2013, Fogo received the ASCA Young Chiropractor of the Year award.

He has practiced chiropractic for about 13 years.

Fogo started practicing in Chelsea in October 2004 and has also practiced in Montgomery and Wisconsin.

Born and raised in Nebraska, Fogo said he became interested in chiropractic, “a holistic approach to the treatment and management of health conditions” with safe, natural and non-invasive treatments, through personal experience.

“I had a really good hometown clinic that got me interested in it,” Fogo said. “It was ultimately something that helped me recover from injuries, especially sports injuries.”

After graduating from Hastings College with a degree in psycho-biology, Fogo attended Cleveland Chiropractic College in Kansas City, Mo.

Fogo and his wife, Mary, live in Chelsea with their two sons, Eli and Fin.