MHS students save young girls from drowning; honored with resolution 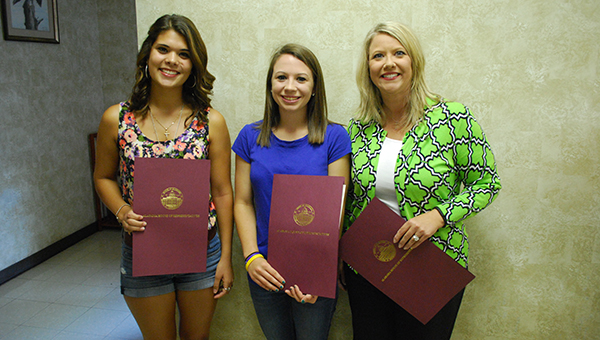 Recent Montevallo High School graduates Lupe Serrano and Meredith Goggins are presented a resolution by Rep. April Weaver, commending them on their heroic actions to help save the lives of three young swimmers at Perdido Beach. Not pictured are Kayla Smith and Katie Hamrick. (Reporter Photo/Graham Brooks)

MONTEVALLO–Four recent Montevallo High School graduates were honored at the June 22 Montevallo City Council meeting for their heroic actions that took place on May 22 at Perdido Beach when the students helped save three young girls from drowning.

The four MHS graduates were on their senior trip in Peril at Perdido Beach when they began to hear a woman frantically calling for help for her three daughters who were 30-40 feet out into the water in need of help.

Kayla Smith, Lupe Serrano, Meredith Goggins and Katie Hamrick collectively made the decision to swim out into the ocean and help bring the three girls to shore.

Paramedics then arrived on the scene and performed CPR on the two older girls before they were flown to Sacred Heart Hospital. The youngest daughter did not require hospitalization.

For their honorable and courageous actions, a resolution was passed on June 3 by the State House of Representatives and Rep. April Weaver presented the resolution to the girls in attendance at Montevallo’s Council Meeting.

“I’m just incredibly proud of these young ladies,” said Montevallo Mayor Hollie Cost. “You represent us well and you’re excellent role models and what you did was incredibly brave.”

Serrano and Goggins were the only two girl’s able to make the council meeting and Goggins attributed the rescue effort to the help of God.

“It wasn’t us that was out there,” said Goggins. “It was totally God because if it wasn’t for him…, my lifeguard walks on water and that’s all I can tell you. If it wasn’t for him none of us would’ve made it out of that water.”

The resolution ended by saying “Be it resolved by the House of Representatives of the Legislature of Alabama, that the girls are hereby most highly honored and commended for heroically rescuing three strangers struggling in the waters of Perdido Beach, and it is directed that a copy of this resolution be presented in admiration and appreciation, along with best wishes for future endeavors.”

The three young girls all made a successful recovery.