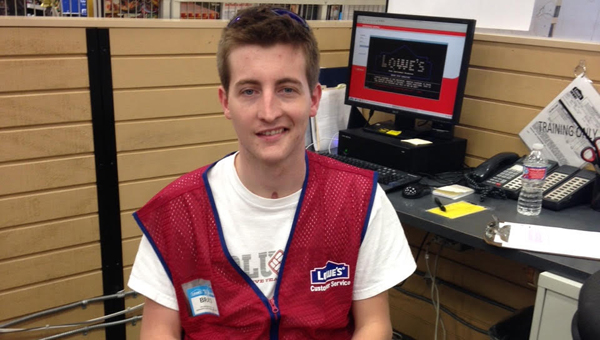 One of The Arc of Shelby County’s individuals recently gained employment at Lowe’s through The Arc’s employment services program. (Contributed)

PELHAM—In Alabama, more than 76,000 individuals are diagnosed with a developmental disability. Those residents in Shelby County can turn to The Arc of Shelby County for support.

On June 9, The Arc of Shelby County released its 2014 annual report, announcing its service to more than 1,000 individuals and their families through employment services, early intervention and The Arc’s community living program. All of these programs are free of charge to residents of Shelby County.

“As a nonprofit, we want to be very transparent,” said Tery Young director of development at The Arc of Shelby County. “Our annual report is a good way to get the message out there to everyone.”

With donors becoming more invested in the nonprofits they support, Young said it’s very important to show what The Arc is doing, especially with an operating budget for 2014 being about $1.2 million.

Young said one of the biggest keys in this report is the number of individuals served, which has increased greatly. She attributes this to the growth within Shelby County as well as The Arc serving some of Chilton County as well.

Another big accomplishment for The Arc was recognition of its employment services program. The Alabama Association of People Supporting Employment First voted The Arc of Shelby County’s Employment Services as the 2014 Agency of the Year.

The report states that at least 75 percent of individuals with disabilities desire some level of competitive employment, but only 15 percent actually have jobs in integrated non-facility situations.

Young said the number of employers on board with The Arc and willing to work with them has increased. They have relationships with Lowe’s, Publix, T.J.Maxx, Chick-fil-A and more.

“It offers our participants variety,” Young said. “It gives them a larger opportunity to work where their heart is.”

Only a couple years old, the community living program offers families and individuals help and resources all in one place. They have started parent workshops and continue to expand this program.

“That was an area where there are a lot of resources available in community, but the family might not know where to go to,” Young said. “It just helps them out in the process of everyday making the best of what’s out there.”

The report states that 4 percent or more children under the age of 3 have at least a 25 percent delay in one or more areas of development, and Young said they were able to serve about 160 children per month.

“All our services are done in the participants natural environment,” Young said. “We don’t want to interrupt their day by bringing them here. “

She said The Arc plans to continue expanding programs by word of mouth, by moving into Chilton County and getting in front of employers and pediatricians.