COLUMBIANA–A 25-year-old Montevallo man is being held in the Shelby County Jail on bonds totaling $2,500 after he allegedly led Shelby County Sheriff’s Office deputies on a pursuit that ended near downtown Montevallo on Monday, June 22. 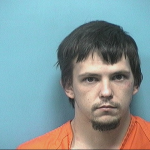 Jonathan Albert Smith was arrested and charged with driving under the influence, unlawful possession of a controlled substance, attempting to elude and reckless endangerment according to his arrest warrants.

At approximately 5:50 p.m., deputies attempted to initiate a traffic stop on Smith’s vehicle for reportedly “swerving through lanes of traffic” in the area of Alabama 119 and D & M Road near Montevallo. Smith allegedly refused to stop for deputies, which resulted in deputies pursuing Smith’s vehicle along Alabama 119 through Montevallo according to SCSO Lt. Clay Hammac.

The vehicle stopped in the area of Alabama 119 and Shelby Street at approximately 6:20 p.m.

Smith was arrested without injury and transported and booked at the Shelby County Jail.