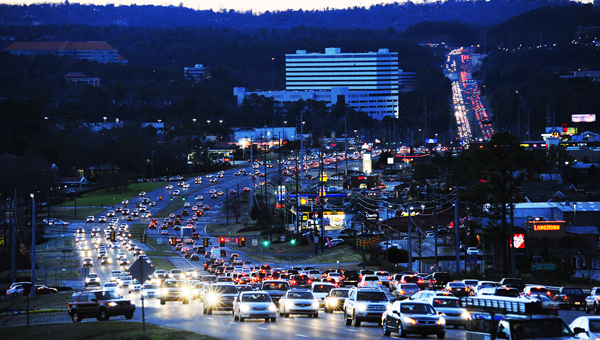 A project to widen U.S. 280 between the Cahaba River bridge and Interstate 459 will begin this summer, ALDOT confirmed on June 22. (File)

A widening project on U.S. 280 between the Cahaba River and Interstate 459 likely will start in the next two weeks.

The project will affect a nearly 1-mile stretch of the road spanning from the area of Birmingham Fire Station No. 32, just west of the Cahaba River bridge, up to I-459, ALDOT 280 traffic operations engineer Brett Sellers said in a June 22 interview.

The project also calls for two additional turn lanes at the entrance of Grandview Medical Center, the new location of Trinity Medical Center that will open in October.

“We’re trying to get this done in anticipation for the fall opening of the hospital,” Sellers said.

The turn lanes will help with traffic flow into and out of the hospital’s campus.

The project was scheduled to begin this week but has been delayed for unknown reasons, he said.

“It will result in some (lane) closures,” Sellers said. “We do have restrictions on the contractor. They can start closing lanes at 7 p.m. All lanes have to be opened back up by 6 a.m. We only allow them to close lanes in those overnight hours.”

The project could take about 75 days to complete, Sellers said.

Sellers urged motorists to be alert when traveling through construction areas and to observe the work zone speed limits.

“Just be patient,” he added. “We make efforts to try to minimize impacts to the traveling public as much as possible.”