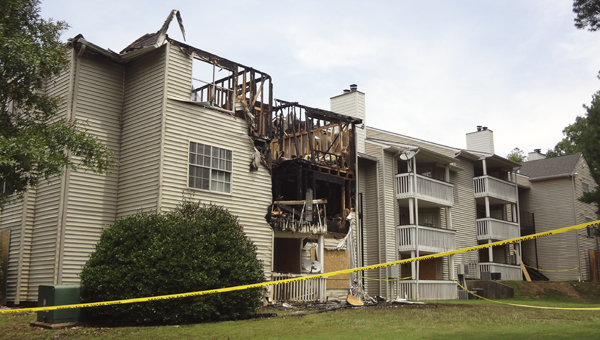 A fire that broke out at Riverside Parc Apartments off U.S. 280 on June 23 resulted in no injuries, but displaced about 30 residents in one building. (Reporter Photo/Emily Sparacino)

NORTH SHELBY – No injuries were reported from a fire engulfing an apartment building off U.S. 280 on the night of June 23.

At about 11 p.m., firefighters from Cahaba Valley Fire and other area agencies responded to the fire at a building in the Riverside Parc Apartments complex on Cahaba Forest Cove.

About eight apartment units in the three-story building were damaged by the fire, and the remainder of the building sustained smoke and water damage, according to Grant Wilkinson, commander and public information officer with Cahaba Valley Fire.

“About 30 tenants were displaced by the fire,” Wilkinson said. “Most of them found housing last night with friends and family, but there were several that the Red Cross stepped in to assist.”

Firefighters gained control of the fire at 11:30 p.m., and the first units were released from the scene at about 12:30 a.m., Wilkinson said.

The cause of the fire is unknown and under investigation.

All of the tenants in the affected building that were present when the fire started were able to escape, Wilkinson said.