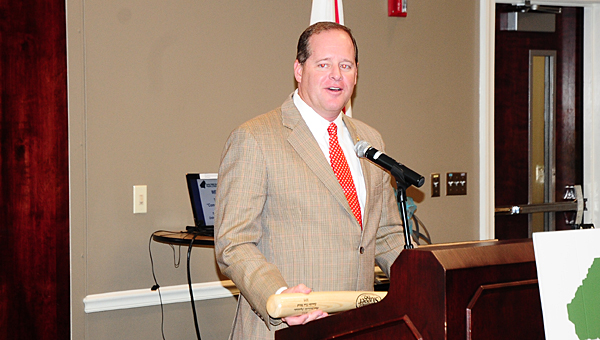 The Business Council presented Ward with the award, which came in the form of an engraved baseball bat, during a Greater Shelby County Chamber of Commerce meeting at the Pelham Civic Complex and Ice Arena.

The award came as a result of Ward’s efforts to overturn a 2013 Alabama Supreme Court decision allowing brand-name drug manufacturers to be held liable for physical injuries caused by a generic drug product the company neither made nor sold.

Ward sponsored a bill in the state Senate during this year’s regular legislative session doing away with the “innovator liability” theory, and the bill was later passed and signed into law.

Business Council of Alabama CEO William Canary presented Ward with the award, and said the legislation’s passage was a priority for the BCA this year.

“Due to a recent court decision, Alabama manufacturers were liable for products they didn’t make or sell,” Canary said. “We had to do something. Fortunately, senator Ward led the charge. It simply says ‘ If you didn’t make something, you won’t be held accountable for it.

“He certainly believes in miracles,” Canary said of Ward, noting the Alabaster senator is “one of the great leaders” in Alabama. “Look at what he has done this year alone on prison reform. These are types of individuals who display political courage.”

“I think through the innovator liability and innovative prison reform, we are a state on the cutting edge of doing the right thing,” Ward said. “Business is good for Alabama. We should make it easier, not harder to do business in Alabama.”