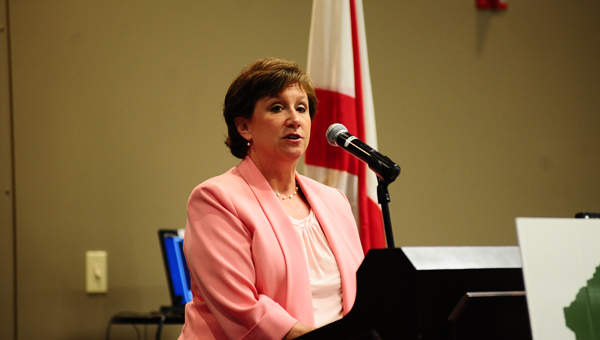 Nancy Collat Goedecke up hearing her parents describe going door-to-door raising money for the United Way campaign. Sixty-years ago, they had a handful of pledge cards, taking donations at the door, and the result from the campaign was about $1,313.

As Goedecke, 2015 United Way Campaign Chair, addressed the Greater Shelby Chamber of Commerce June 24, she explained that while the tools for fundraising have greatly changed, the need has not.

“There are many reasons why a person will give, but one of the most important reasons is I’ve seen the difference it makes in the lives of others,” Goedecke said.

Last year, United Way raised about $38 million. There are 19 United Way funded agencies operating within Shelby County, including The Arc of Shelby County, Easter Seals of Greater Birmingham and Family Connection, Inc. In 2013, those agencies served about 172,131 Shelby County residents.

“I’m proud that United Way has played a positive role in improving the quality of life for us and our neighbors in need,” Goedecke said. “The demand for basic services like food, shelter and quality education…are real challenges for all counties, including Shelby County.”

Goedecke said 2015 will see United Way’s largest digital presence ever, and the team is “counting on it yielding big results.” As of June 11, United Way kicked off its summer campaign, the Pacesetter Campaign, with a goal of about $11.7 million. Fifty-one corporations, businesses, hospitals and nonprofit organizations in Blount, Jefferson, Shelby, St. Clair and Walker counties will be participating.

“We will announce our general campaigning goal as well as our goal for Shelby County this fall, but I can tell you now, we are setting our sights high,” Goedecke said.

United Way has been helping its five-county areas for 93 years, and Goedecke serves as its first female chair in that time. She stressed that the need is great in Shelby County as the number of “working poor” families and families below the poverty line continue to increase.

She asked members of the chamber to give more as the need for funds grows with the county. Goedecke also asked people to use #whyigive on social media as part of its new campaign.

“Let me be clear: this is your United Way,” Goedecke said. “One of my goals when I accepted this opportunity was to build on our successes and challenge all of us to do more. We have so much more potential in central Alabama.”