Damaged, graffiti-tagged home on 119 coming down 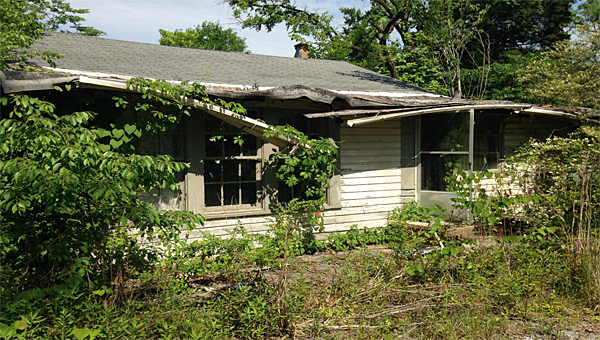 The Alabaster City Council agreed to move forward with demolishing a heavily damaged house and garage off Alabama 119 on June 22. (File)

ALABASTER – A graffiti-tagged, heavily damaged home off Alabama 119 soon will be coming down after the property’s owner said he plans to demolish it.

During a June 22 meeting, the Alabaster City Council voted unanimously to fund the demolition of a house and garage at 10090 Alabama 119 if the property’s owner has not demolished it by August.

Ward 2 City Councilman Bob Hicks said the property is planning to complete the demolition within the next few weeks, but said the council’s action will serve as a backup plan in case the house and garage are not torn down by August.

“The property owners have requested a deferment until August,” Hicks said. “If the terms do indeed get met, we won’t have to do anything. If not, it’s a safety net to ensure the best interests of the public are met.”

Nobody spoke for or against the demolition during a public hearing before the June 22 council vote.

AHAB photos depict the long-vacant home in significant disrepair. Portions of the home’s roof have collapsed, the structure is unsecured and the lot is overgrown. The unsecured garage structure on the property has been spray painted with graffiti.

If the house and garage are not demolished by the August deadline, the city will fund the demolition and attach the cost as a lien against the property.