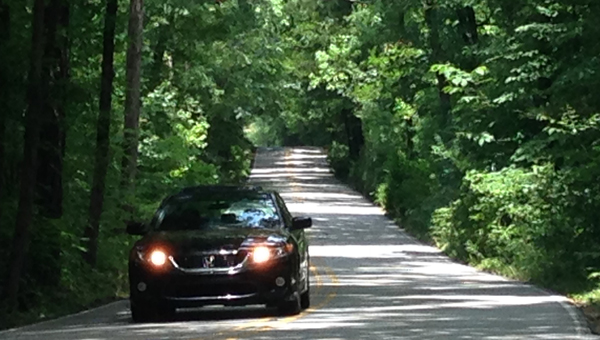 “The road coming into the park has had some safety issues and we look forward to that being improved,” said park superintendent Kelly Ezell.

The project begins along Amphitheatre Drive, a stretch known as the “tree tunnel,” and extends to the intersection, which is a distance of about 8,000 feet. Dudchock said the intersection will be improved with the addition of turn lanes or a possible conversion to a roundabout, although the roundabout option may require a retaining wall.

Current surveying is the preliminary step for the project and will determine which route the county will pursue, as well as the fate of the “tree tunnel.”

Oak Mountain’s tree tunnel has been called one of the most dangerous roads in Pelham. A Feb. 27 intersection crash report records a total of 332 crashes, with three fatalities, on State Park Road between Alabama 199 and John Findley Drive between 2004 and 2013.

A formal request for the project was initially sent to Scott Tillman, Regional Planning Commission of Greater Birmingham, on Aug. 14, 2014, reporting that the project would be collaboration between Shelby County, the Alabama Department of Conservation and Natural Resources and the City of Pelham. The request estimated a total project cost of $2.5 million.

Currently, State Park Road is about 20-24 feet wide with no shoulders in some areas and grass shoulders in others. Dudchock said in a June 23 email, the planned improvements include adding 8-feet-wide paved shoulders along both sides of the road for the length of the project. It will also include storm drainage improvements, intersection improvements, lighting and landscaping within the intersection area, adding guardrails and pavement patching, along with some additional corrections.

Updated project budgets and Alabama Department of Transportation (ALDOT) contracts indicate the project will cost of a total of about $2.6 million. Dudchock said the partners of the project secured 80 percent of funding through the Metropolitan Planning Organization of the Regional Planning Commission of Greater Birmingham. The additional 20 percent funding comes from a local match split between the partners.