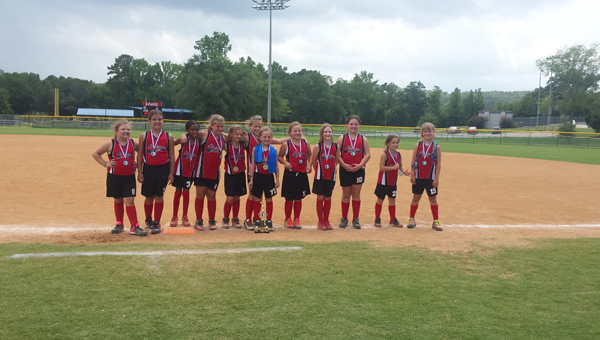 The Alabaster 8U softball All-Star team competed in the South Central area tournament over the weekend of June 19-20 and qualified for the state tournament, which is taking place in Florence from June 25-27. (Contributed)

The Alabaster 8U Girls Softball All Star Team competed in the South Central Area Tournament at Veterans Park and qualified for the state tournament held from June 25 – 27 in Florence. The girls played in the Pre Area 1 and Pre Area 2 tournaments the first two weeks of June in Thorsby and Maplesville but did not win a game. They continued to work hard and practice, when they could have easily thrown in the towel.

The team went into the South Central Area Tournament at Veterans Park hoping that their hard work would pay off. They started the tournament off on Thursday night with a tough defeat to North Chilton.  They came back on Friday night to defeat Prattville and stay alive in the tournament.  They played early Saturday morning needing a win to clinch a qualifying spot in the state tournament. Up against North Chilton again they pulled out a last inning victory 8-7 to qualify.

In their next game for third place they came up a bit short losing 12-11 to Prattville. The girls finished 4th and received medals and a trophy. Due to their hard work and perseverance, the girls accomplished their first goal of qualifying for the state tournament.