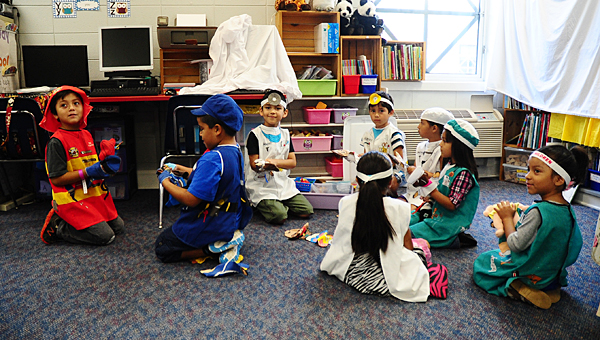 ALABASTER – Alabaster English as a second language student Azul Lara carefully mulled over her options as she gazed at a table containing a dozen costumes representing everything from a firefighter to veterinarian on June 25.

“What would you like to be?” Meadow View Elementary School first-grade teacher Jodi Richardson asked Lara, as the incoming first-grade student pointed at a white doctor’s costume.

After Lara excitedly put the costume on, she walked to the other side of the room to join her classmates in picking out a puppet matching her profession for the day.

While the students dressed up as different types of public servants on June 25, they were overcoming challenges some of their peers will never face.

Nearly 200 English language learner students spent the weeks of June 15-19 and June 22-26 attending a free ESL camp at MVES for Alabaster students of all ages. The school has been hosting the camp for 13 years, and is able to offset the cost with the help of a federal grant.

During the camp, students from incoming kindergarteners to high-schoolers do everything from making pottery to developing their own business marketing plans. The high school group even took a trip to Lawson State Community College, and likely will appear in a commercial for the school.

“When (ESL) students go home for the summer, they don’t have as much interaction,” Heatherly said. “This camp helps them strengthen their English skills while preparing them for the upcoming school year.”

This year’s camp was themed “One community, one world,” and was led by teachers who are either ESL certified or who have ESL students in their classes during the school year.

Students in the camp received transportation to and from the school each day, and received free breakfasts and lunches through the ACS summer feeding program.

For many students attending the camp, particularly incoming kindergarteners, it was their first time away from their parents.

“A lot of times, this is their first exposure to an educational setting,” Heatherly said of the incoming kindergarteners. “So if we can help with lowering their anxiety to school, we’ve done our job.”